Last night Barranco Camp won the prize for the most spectacular camp site so far. This morning it still has that accolade. The Western wall of Kibo is free of cloud and drips with ice. Below the town of Moshi is clearly visible. To one side is Barranco Wall which is shear – and that is where we are going.


Barranco Wall is a scramble and a delight. We had not expected a technical climb but a bit of scrambling lightens the monotony of just walking. Two of our party suffer from vertigo and are clearly extremely uncomfortable with this exercise but cope magnificently. At the top of  the wall we stop briefly to robe up for the in coming wet cloud formation. My hopeless poncho stays in my rucksack.

At the top of Barranco Wall we see the first examples of architectural cairns.

Cairns litter the English Lake District where walkers and climbers have for centuries piled up stones to form small pyramids that define the path, a vital navigational aid when the mist descends. There is a culture of adding one or two stones to cairns as you pass – a democratic way of expressing mountain camaraderie and mutual concerns for safety.  Here on Kilimanjaro the path often splits into many diversions, and occasionally there are cairns of varying sizes vaguely defining the route, but here are also cairns that are not way-markers but are expressions of architectural aspiration. And stunning in their simplicity they are too. 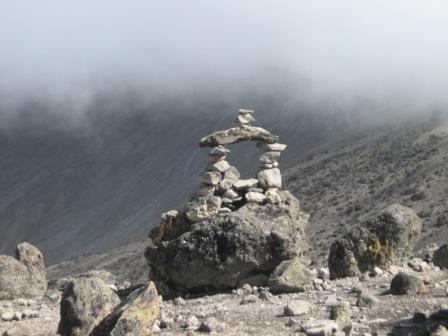 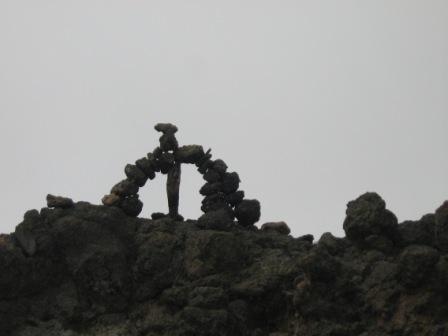 These votive icons are evident all the way up the mountain, and I should have taken the time, called a temporary halt and constructed one or two myself.

As we descend into Karangao Valley to climb the other side the rain becomes torrential. There is thunder in the air and my waterproof jacket is clearly only shower proof.  The inescapable truth dawns on me that I have a defective poncho, I have no waterproof over-trousers, my gloves are not waterproof, my beanie is soaking wet, and my jacket is probably only mist proof. Oh joy! Hypothermia beckons and I start worrying in earnest about the final ascent.

It is here that I am reminded of the statistics given out by Tanzania Parks that only 45% of starters make the summit and that chillingly on average 10 people die every year on the mountain of altitude related issues.This is a level of paranoia I do not need.

Day 5 – Karanga Camp to Barafu Hut (4,600m)
Why are we doing this? We arrive at the highest long-drop in Africa.

Last night at least three of us had nightmares. One dreamt of falling off the mountain – understandable perhaps for someone who has issues with heights. One fought in her sleep with her Mother (“and this never happens in real life”). And someone who buys clothes off the peg, prêt a porter and has never had a "fitting" in her life, had a nightmare about a flaming row with a dress maker called Lucy.

Drearily I had a dreamless sleep but woke, as every other morning with a sense of dread and foreboding about the task ahead. Not today’s task – but the final task, the big push – summit day. There is real anxiety about this which centres  around not only mundane stuff like the expectation of racing hearts and shortness of breath, insufficient water and not enough thermal layers, but the now certainty of hypothermia brought on by defective rain-gear, and also the very real fear of altitude sickness. So what the hell – the chilled rational mind asks – am I doing on this frozen bloody mountain? Who am I kidding and who am I trying to impress?

It is bitterly cold at day break and with distended bladder you struggle into fleece and boots and nose out through tent flaps stiff with ice into a frozen dawn and – you know at once why you are there. It is an incomparable raw beauty. The air may be thin, but it is pure. The sky is a clear roseyette light blue. Cloud wisps are painted on the underside with deep reds and golden yellows, and behind – always behind – Kibo rises raw, massive, dark brown rock, mottled with ice and snow; overseeing all.

Breakfast cannot be dwelt upon. Limp toast and flattened eggs snarling at you with attitude, it’s just like all the others. Souped up with that awful instant coffee we’re off again – pole pole at snails pace.

To day is gentle, up a long slope, along a winding path and up a steep escarpment to the highest long-drop in Africa at Barafu Hut. As usual we settle into the rhythm and walk for an hour before the first call of nature stop is requested. As we have ascended the opportunities for privacy have become more and more remote.

Barafu Hut is a sad place. Kilimanjaro Parks have a couple of tin sheds which double as administrative offices and sleeping quarters for their employees, otherwise the place is littered with tents all jostling for whatever little flat ground there may be. There is an all pervasive smell of human shit. The Tourists long-drops are located on the edge of the cliff – because that is where the longest drop is and the tales of climbers having fallen to their deaths during the night while popping out for a mid-night wee are all too believable.

This is truly a transit camp, occupied with people on the move, or at least about to move. A place burning with the anxiety of potential summiteers, glowing with those who have the quiet exhausted satisfaction of having summitted, and the limp luke-warm sense of those who did not make it to the top; but my god there should be no sense of failure there, because frankly to have got this far is an extraordinary feat.