The kitten was kept secret from the two Collies – Hamlet and Seth, Tyke the oddly shaped Staffie, and of course the  two elderly irascible cats.

By the time Margaret got home the next day it was clear, in my mind at least, that the kitten was here to stay.

Tiger incidentally is a cat who has perfected territorial protection to a fine art – and that embraces intrusive humans as well as other cats, dogs, birds, cows  . .

The fact is that ever since we “got” Hamlet and I was banned from calling his brother “Yorick” I vowed to name the next animal “Yorick”. Goldfish seemed not to fit the bill – and after all who the hell gives Goldfish names anyway? So it was pre-ordained that Yorick would become, well - Yorick.

. . . . . and banged on about the whole story of finding the little chap and so forth and was able to report that the vet had declared the kitten a chap and not a chapess! (Thank god for that because we had have been fighting of potential suitors for years to come.) And I was also able to report on our efforts to find its original owners which were to put up some half hearted notices on local telegraph poles advertising his loss -
"Found. Scraggy flea ridden small cat with halitosis. Clearly the offspring of badly interbred parents. Will only accept obscenely large reward in return for information of its current whereabouts" with a fictitious cell phone number on the bottom.
I also put a photo of Tiger on the notice in the vain hope that someone will recognise her on the street and take her off our hands instead.

Obviously things were not always as smooth as one would like, but I felt strong enough to report some misgivings about interpersonal relationships as they stood at that point in time, although I must say the disdain of the senior felines was something of a relief.

I went on to report that we were currently fighting off the unwanted attentions of Hamlet and Tyke who both seem to relish the prospect of kitten burger (without the extra chips), and that the other two cats seem to be broadly unfazed. I remarked that it is amazing what old age can do to one.
On reflection the phrase “amazing what old age can do to one” seemed to be taking on a new and rather disturbing dimension. I can say this with the benefit of hindsight because I rounded off this very long and descriptive email with some guff about keeping everyone informed about his progress, “if not hourly then certainly daily” and admitted that this had got absolutely nothing to do whatsoever with offspring substitution . . . . .

Within days this elicited the obvious response –

Well at this point in Yoricks’ career he has been voted the cutest Kitten ever by everyone who he has met - excluding Tiger who can't work out what all the fuss is about. Tyke is  absolutely besotted. She cannot get enough of the little mite. She stands (or sits) all a'quiver making alien epiglottal mewling noises, trying to nuzzle the Yorick tail. Even by Tykes undeniably odd sexual orientation this would be an odd mount so it has to be something strictly platonic. A most interesting relationship! (As an aside Tyke has taken to trying to hump my gear-changing arm while I am driving. Why this should be I cannot fathom - and it is certainly not encouraged on the highway, or anywhere else I hasten to add.)

By now of course the curse of Yorick has taken hold. In response to an insistent, not to say demanding email from Youngest Daughter “Yorick update .......?.” I continued to deliver the goods:- 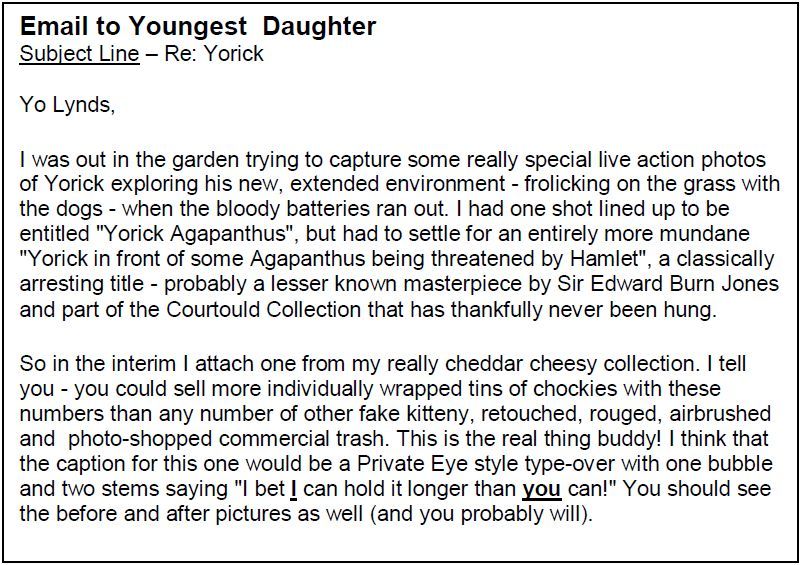 I went on to explain that –

"Otherwise - his journey of exploration through the underbelly of life continues with some rather risky Shadow tail chasing and some very dangerous larger dog tail chasing. (Shadow being the larger of the two elderly irascible cats)

Yesterday Yorick, Hamlet and I watched with fascination as Shadow noisily chomped his way through a medium sized helping of Gecko on the lawn. He (Yorick that is) has graduated from eating and defecating (in a large plastic plant tray) in the bathroom, to eating in the corridor and crapping in the loo in a bespoke (although admittedly plastic) cat-litter tray like any grown up human being - oops sorry - cat.

I have to admit that my only real concern is a Spotted Eagle Owl (Smallkittenus eatus) which has been hanging around in a benign sort of way for a year or two; and is now hanging around in a very threatening sort of way. I am trying to teach Yorick to keep looking up while he is outside - but he keeps falling off the edge of the verandah - especially at dusk when the risk of being grabbed by hungry talons and whisked to some grim nest is at its height.

I have given the night guard written instructions about - well frankly "guarding" the kitten. I am not sure if he fully understood them first time round - perhaps his English is not too good - but he did raise his eyes skywards in concentration so I think he has caught on.

Having just invested in a couple of GPS units for a project I was thinking of strapping one of them to Yorick so we can keep an eye on his movements, but I feel that his dear little back would bend under the weight, and that my colleagues would baulk at R5,000 of equipment being wasted on one so small"


The time however was looming when Yorick was to visit the vet. Little did I expect what a trauma that this would turn out to be for me.