It is a dark and stormy evening. Lightening flashes across the skies and mountains are rampant with the base-drum rumble of thunder. The Collies are lying under the desk panting with barely concealed anxiety, and Tyke is gasping asthmatically by the side of the filing cabinet in naked terror. Yorick is curled up on the only comfortable seat in the study with a look of bored disdain on his face.

I am trying to download the thoughts of Marcus Aurelius in an effort to educate myself in the true precepts of stoicism. As this task nears completion events unfold rapidly: –
“Rapidly” is probably less than one second; and all that’s left of the event is the feeling that it all lasted a lot longer, the smell of the fried router power pack, and the more pervasive whiff of a mighty rear end expelation from Tyke.

Hallo Summer! Season of violent electrical storms and the death knell of any electrical appliance stupid enough to remain plugged in to the mains.

I sit back and try to be stoical – after all this is nothing unusual. I could check out how Marcus Auraliaus would perhaps have dealt with the situation – but of course cannot, because not only is there no power, the down-load was not completed. The curse of the information age is that you need good old fashioned 19th Century power.

And the IT age is wonderful is it not? I am not addicted to Facebook – but I know many people who are.

Me
I would just like to annonuce that my cat now has 37 genuine facebook friends (well mostly genuine) of his own. What does that say for the power of social networking? And if you are not a friend of his . . . . is life worth living?

So there you have it. The guilty secret is that Yorick has gone cyber. And there are other people out there daft enough participate in this little fiction. Fiction?

Yorick
It would help if you spell "annonunce" properly . . ..

And what’s more he’s not afraid to use the spell checker either.

Anthony S
Well done to your cat. I've been trying to get my dog to use FaceBook, but he's sold on MySpace.

Yorick missed this one because I think that he would have had a dictionary fit . .

This exchange was clearly promoting some searching thought .

Anthony S
quick cat quote... "Thousands of years ago, cats were worshipped as gods. Cats have never forgotten this." - Anonymous

I have a feeling that this might actually have been said also by Marcus Aurelius. Unfortunate fuel I’m afraid to the feline ego.

Yorick
You damn right about that Mr. S

And there he is again, sneaking in a quick comment behind my back. Obviously got hold of the home help's laptop. It’s all fun of course but I do have a sneaking fear that it might just get out of hand –

Me
The fear is of course that the cat will end up with more friends than me. Fat chance!

The advice flows in.

Candy V-O
Remember Steve - dogs have masters, cats have staff. Cats are only here to keep us in our place! I shall toady up to Yorick in a bit....

Me
Candy I know, I know. I am just the secretariat. I look over my shoulder and Yorick is curled up on the only comfortable chair in the study, secure in the knowledge that when I've gone to bed he will, behind my back, respond in (un)kind. Its a real bugger being a pet!

And this is the nub of it. Social networking is essentially a trite activity, a dumbing down of interpersonal relationships. It’s full of commonalities and cliches. Silly photographs of normally sensible folk doing daft things at fancy dress parties when they are legless on bootleg cider after an unusually large spliff. Daily reports on bowel movements and fatuous sayings, invariably punctuated with multiple exclamation marks and sometimes with risqué printers marks such as @*$$#. And my particular favourite - instagrams of the food you are about to partake of. As an antidote to this I suspect Yorick offers an aloofness, a superior mien, and yes – I’ll say it – a snootiness; all natural feline traits. And I venture to suggest just a hint, a soupcan of exclusivity.

Olivia  R-I
I'm sure the only reason Yorick doesn't have more friends, Steve, is that he's rejected most applicants as hopelessly unworthy. Those of us who made the cut are the creme de la creme.

Me
Oh I know Olivia. He is however being seduced by random angst ridden teens from places like deepest rural Idaho or Oklahoma who can't understand why the F... their parents called them "Yorick" and seem to want answers from the wider Yorick community. I suspect that when they read Y's profile they might get an inkling of the extent of his humanness though - 'cos he never hears from them again!

This last bit was a bit of a shocker I have to admit. Stranger than fiction I know – but there are hoards of young men out there who have been saddled with the name Yorick and have no inkling as to the nobility of the label. It’s not the guys from France or Greece who are clearly happy in their Yorickness, it’s the poor saps from the American mid-west. The guys from the vast conservative cereal cropping bible belt who cannot understand why they are not called “Reuban”, or “Easau”, or “Jacob”, or any of the myriad other names the good book has on offer.
I  can just picture the conversation –

“Yorick? Who is Yorick then?”

“Well son he’s a fictional character in a play about an unreliable Danish Prince. The character is a dead Elizabethan Jester who makes a fleeting appearance with a couple of grave diggers. He has no lines and adds absolutely nothing to the story line. In fact there is little opportunity for even the most inventive director to flesh out (as it were) the character in any way.”

“No really. And as soon as you were born we felt that you were the embodiment of all his attributes. You was born to be a Yorick son and you’r Ma ’n Me, we’re mighty proud of you Son.”

Little wonder that with such identity crisis piled on top of “normal” adolescent anxiety the face book pages were getting a little steamy. In fact we (I admit to some editing on behalf of Yorick who does lose interest fairly quickly) had to ditch one namesake after public requests for advice on how to score with girls. And I had to ditch another one from San Francisco (where else!) who was offering graphic advice on how to score with boys! 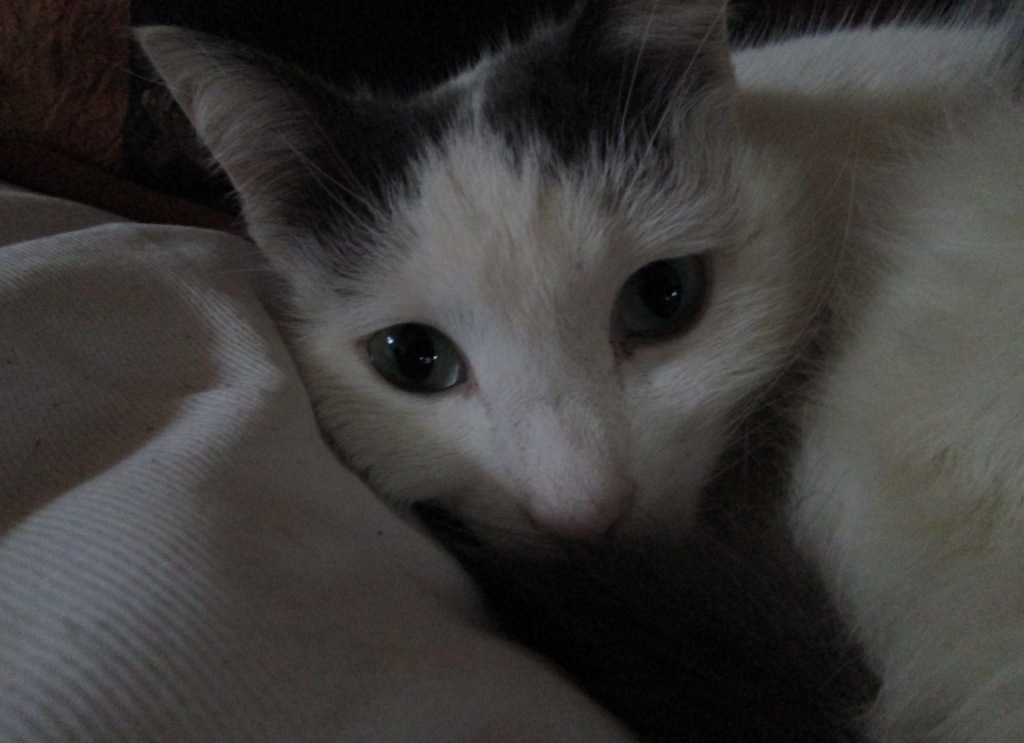 Does anyone know of an exclusively feline social networking site? Pending which of course I suppose you could befriend him - or would this be deemed to be "reverse trolling"?
Posted by Steve Mitchell at 8:18 pm