This story is a very simple one. On impulse I decided to join a group who planned to climb Mount Elbrus. I knew if I didn't just get on with it I never would.

The Caucasus Mountains form a formidable yet politically edgy boundary between Russia and Georgia.  The historical geopolitics of this region is intricate and fascinating. Mount Elbrus is the highest peak in the Caucasus range, the highest mountain in Russia, the highest point in Europe, and is therefore one of the celebrated “seven peaks” – the highest point on each of the seven continents.  An opportunity for such a climb is not to be passed by 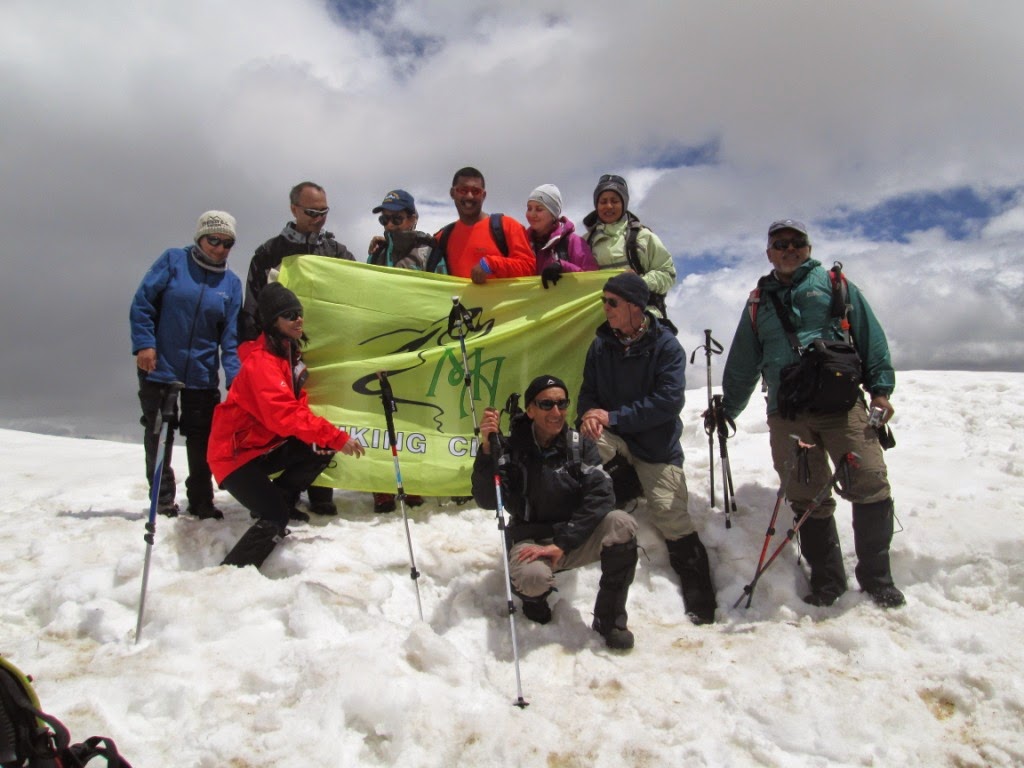 I knew none in the group so this was initially going to be a very individual and personal quest.
However, to my delight after a period of indecision my long time trekking/climbing companion also decided to join this mini-expedition and the adventure was cemented by the promise of a new shared experience with someone of a like-mind and previous shared experiences.

Mountaineering memories tend to be random. The generally avowed intent is to clamber up the side of a mountain, celebrate the summit achievement and slide exhausted down again. On the face of it while this a linear ascend-stop-descend sort of activity, the memories of sights, sounds, smells, fears  . . .  are decidedly non-linear. A chronologically exact tale of ascent and descent is not actually a particularly good story because it doesn't really describe all manner of turbulent emotions in attaining (or not) whatever was set to achieve be achieved. Frankly a blow-by-blow account of a five hour grind up a thirty degree featureless snow slope is about as captivating as, well as walking up the self same slope for 5 hours.

Little episodes in gigantic environments describe a mountain, and as such celebrate in my mind at least the ineffable timelessness of landscapes, and the sheer exhaustion of tribulations far beyond ‘normal’ life. The fact is that long after it’s over minor events, or smells, or sights trigger vestigial memories and for a moment, just for a moment, the mind wanders back . . . . . .

Oh - and lets just dispense with that old chestnut of climbing “because it’s there”. George Mallory actually presented a far more quotable quote -

“So, if you cannot understand that there is something in man which responds to the challenge of this mountain and goes out to meet it, that the struggle is the struggle of life itself upward and forever upward, then you won’t see why we go. What we get from this adventure is just sheer joy. And joy is, after all, the end of life. We do not live to eat and make money. We eat and make money to be able to enjoy life. That is what life means and what life is for.” (Sourced from - https://www.goodreads.com/author/quotes/3348511.George_Mallory).

He of course famously died during the ultimate challenge on the then ultimate mountain, but hidden somewhere in that glorious jumble of words is the equally succinct (not to say facile) unsaid phrase  – “and because I’m here!” What a celebration of life! 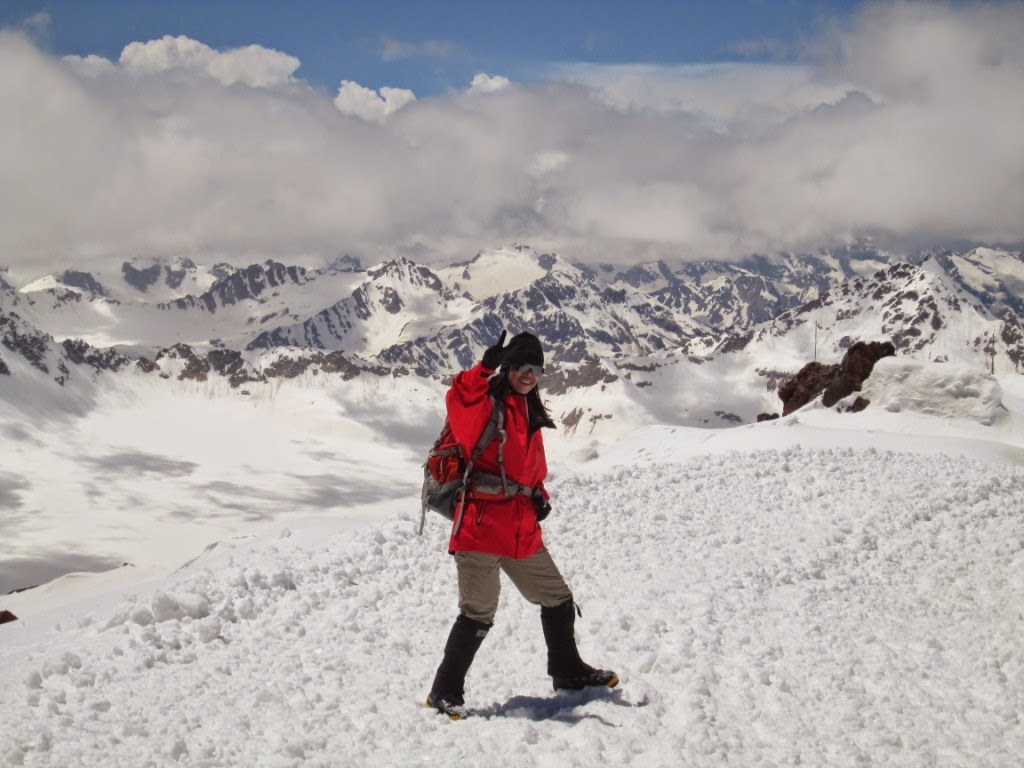 The conventional Elbrus ascent seems not to be a steady climb from one point to a higher one. It is a series of acclimatisation hikes interspersed with exciting chairlift and cable car rides.

We stayed close to the village of Terskol . From there we ascended and descended Mount Cheget, climbed to the Terskol Observatory and climbed down again. We rode the cable car to the Mir Station and walked up to the Barrels huts and ran back down again. We then relocated to the Barrels huts and did a couple of further acclimatisation climbs and then finally made a summit attempt. For some reason this disjointed exercise seemed to be more tiring than a gradual and continuous ascent, adhering to the “walk high and sleep low” dictum.

So this is a disjointed story of an up-and-down sort of trip. However there is an underlying theme in this and all such stories. There are many wonderful quotes that illustrate this theme; and here’s one from Arlene Blum, “You never conquer a mountain. You stand on the summit a few brief moments and then the wind blows your footprints away.” 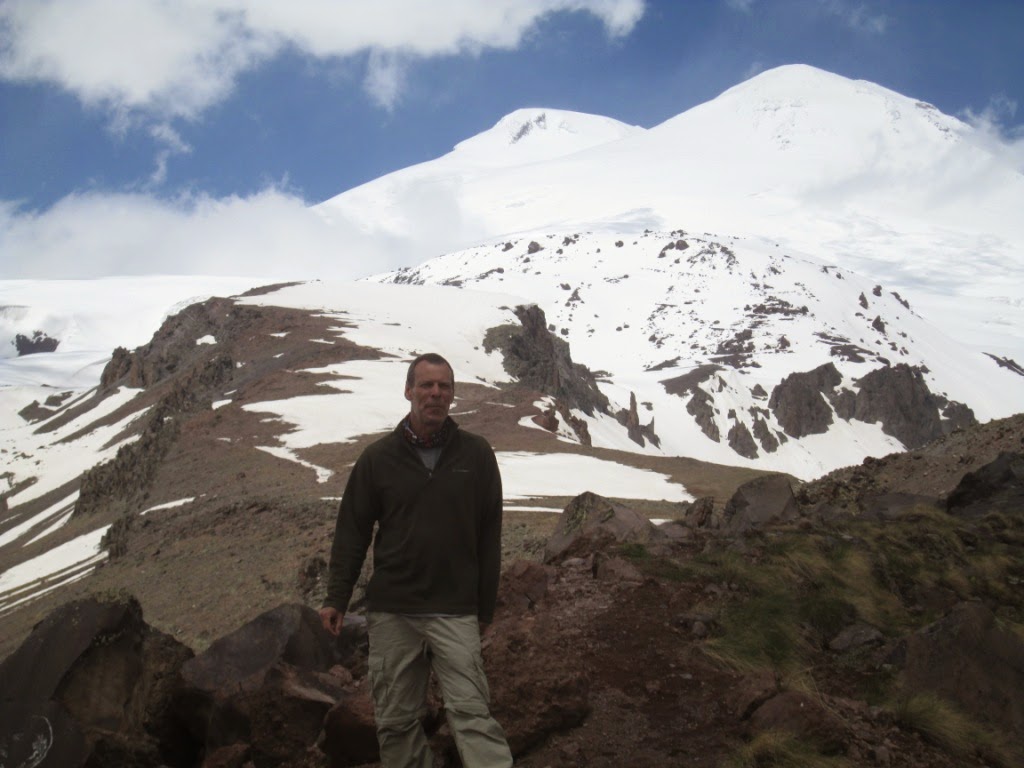 The initial acclimatising walks are followed by the ascent, and unsurprisingly the exhausting descent.
Posted by Steve Mitchell at 10:49 pm