Observatory
An early acclimatisation walk is from Terskol village up to the Observatory that sits on top of one of the arms of Elbrus.

We walk up a farm track that passes a farm yard that is redolent with farmyard smells – fresh and heady cow shit. Above that we follow a winding contour path walk, actually more of a jeep track, through a pine forest. 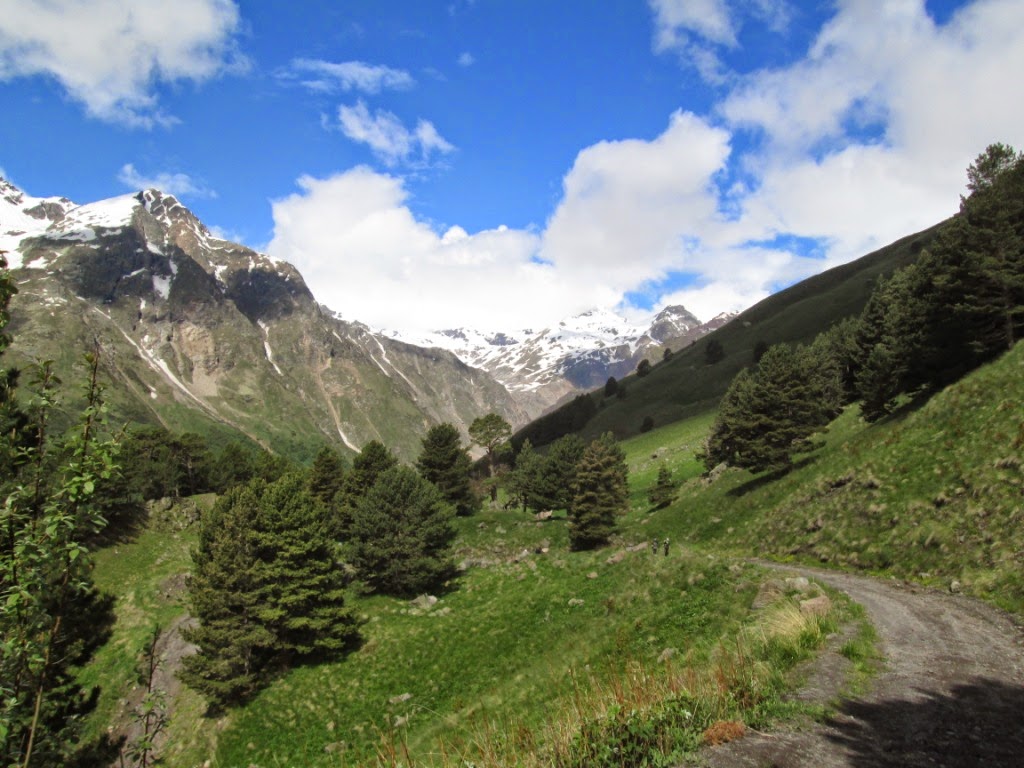 As the trees become more sparse the slopes of Cheget Mountain which we were on top of the day before become more visible. The distant rock, the steep slopes, the snow are a counterpoint to the alpine grasses and flowers and the trees, and I really would not be surprised to see Julie Andrews hoving into view and belting out a number about the hills being alive with Edelweiss or some such nonsense.

This is really such a wonderful walk. We can stride on ahead of the rest of the pack and savour the quiet, the scents and the sheer delight of stretching ourselves in such magnificent scenery.  If this is acclimatisation – then bring on more of it . . . 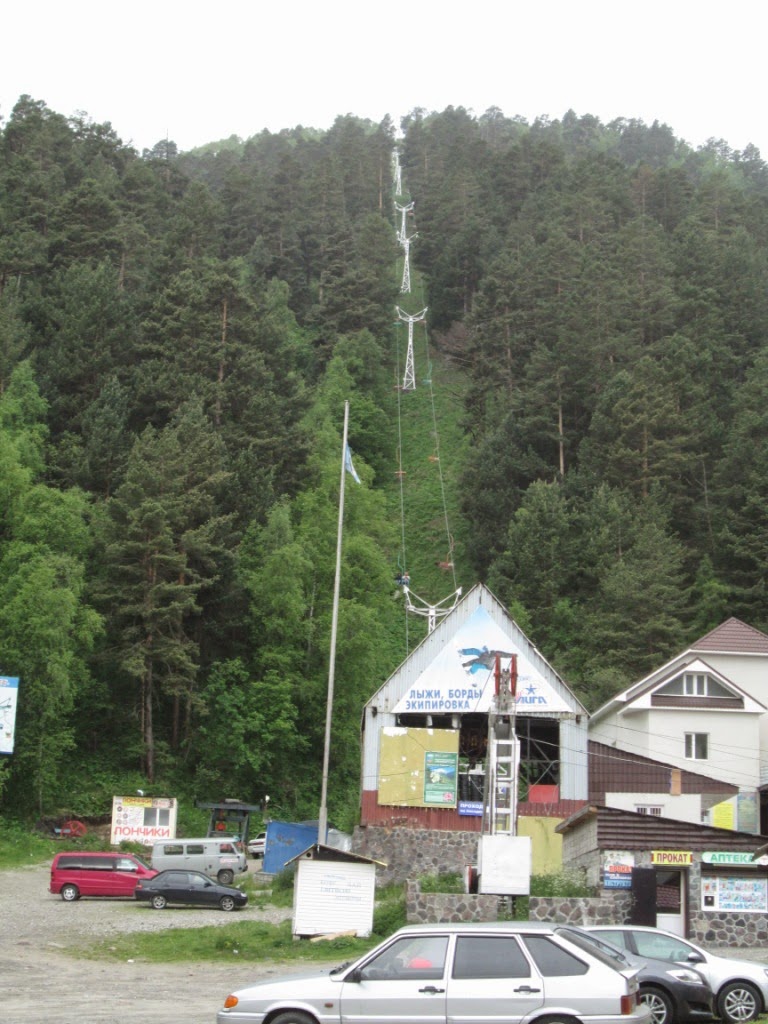 Terskol is a winter sports resort. It is geared to Russians who enjoy snow sports and to a lesser extent to those who want to simply climb mountains. Like any self-respecting winter sports resort it boasts a number of chair lifts and tee-bars. The lowest chair lift comprises chairs in tandem hung on either side of a central pole. The seats are shiny with years of polishing by Russian bottoms, and there are no safety bars across the fronts of the seats which swing violently as we assume a semi-crouching position, knees bent and rucksacks clutched to our stomachs and are spooned up by the seats and whisked upwards. 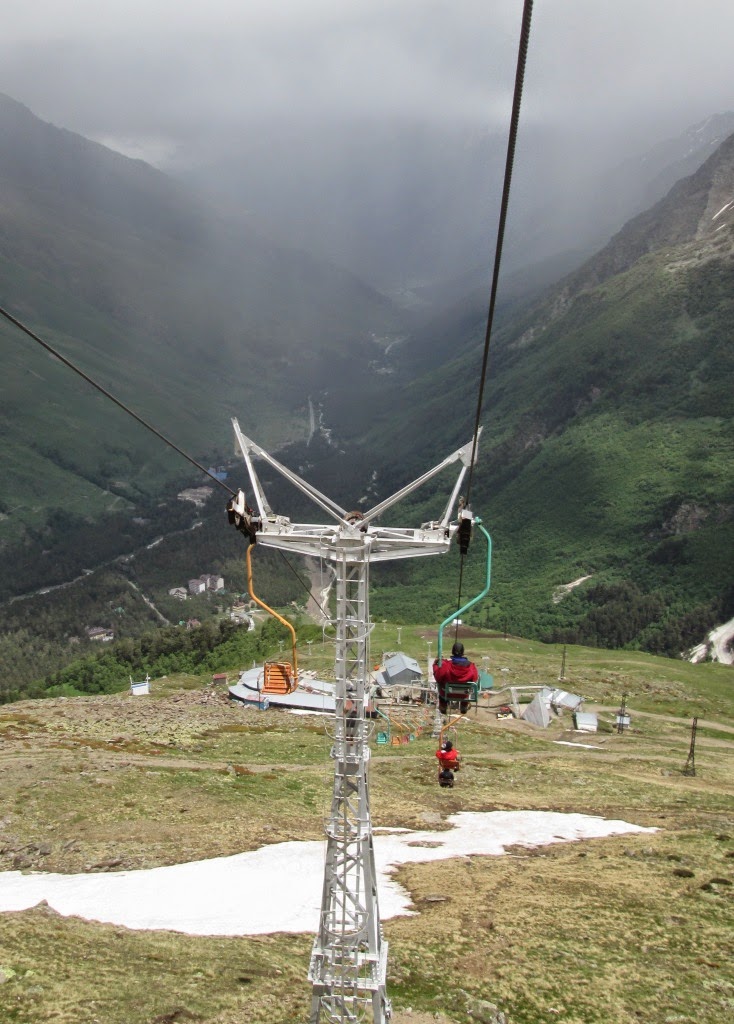 The beauty of chair lifts is the silence as you drift like a bird on low thermals above and sometimes through the tops of the trees. We glide above the tree lined slopes of various nameless pines, and I see silver birch and (I think) rhododendron. And, having latterly read up on the region, there must also have been mountain ash and aspen although I confess I could not have identified them at the time. Above the tree line the mountain slopes are carpeted with tufted grass and dotted with occasional areas of snow. Not to get too carried away by this pristine mountain romanticism the slopes are also dotted with bits of abandoned pylon, cable and wheels left over from previous refurbishments of the chairlift machinery.

It has to be said that if the chair lift ascent is a little disturbing the descent could be sphincter clenching for the less experienced traveller, because just as the ascent involves taking a knees bent , bottom up crouching position so does the descent. It is the backward swing as we are flung over the vertiginous platform to the steep slopes below coupled with the insecurity of the aforementioned polished seats and the lack of any discernable safety measures that give that additional frisson of fear. Lavern’s sideways look of sympathy as I let out an involuntary little “Oops” should have elicited a withering look from me, but I suspect it was more a whimpering one.

Girlish Braids
The “Girlish Braids” Waterfall is aptly named – at least I think it is. If these are what girlish braids look like on Russian maidens then the falls are well named. But whatever they are called they are striking – with the water “fanning out over a convex rock formation creating a liquid filigree lace curtain” (my description). This is a bit of a mouthful in English and I suspect in Russian too, so “Girlish Braids” does seem more apposite, not to say more pronounceable, although still a rather clunky description. 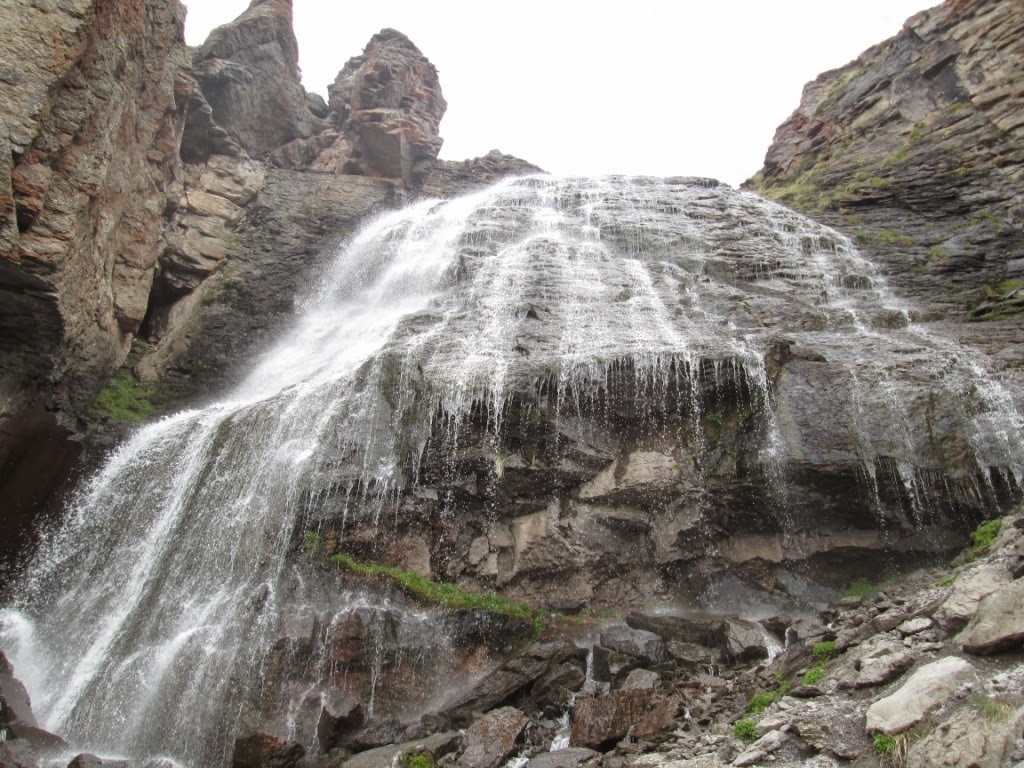 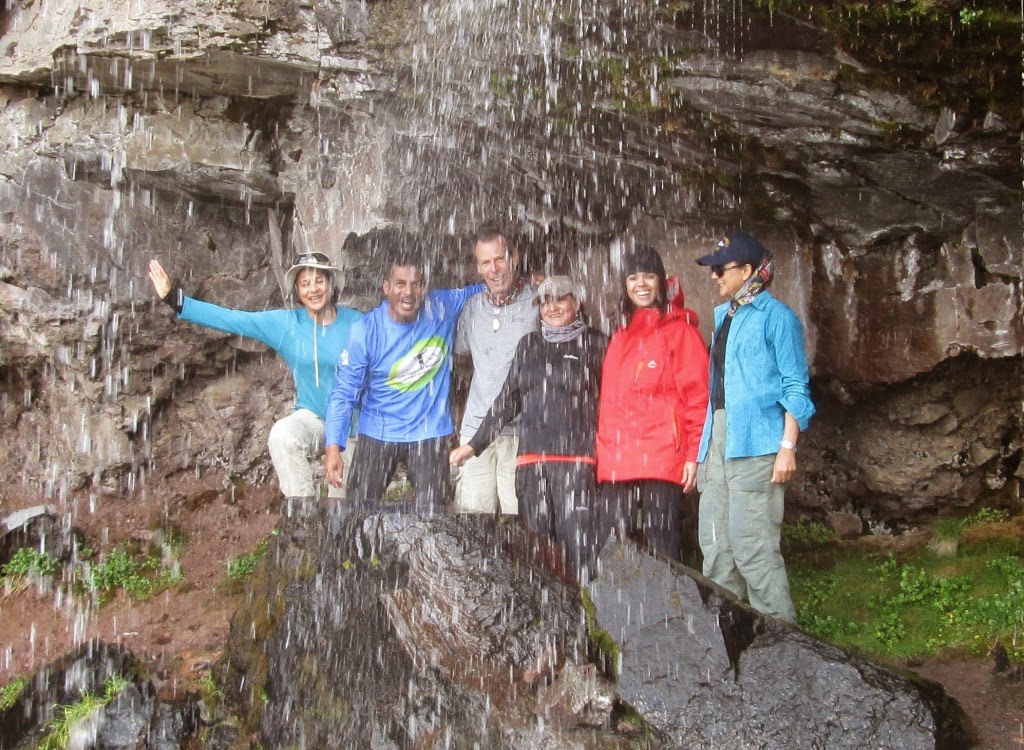 There is an enticing gap at the base of the falls created by centuries of undercutting erosion. By dashing through the falls across slippery rocks you can, and we do, venture behind the braided water curtain – shrieking like pre-adolescents and daring each other to be the first to return back through the water curtain without landing ankle deep in pools of ice cold water. But only after we’ve all had our photograph taken gloriously horsing about behind a curtain of freezing cold water. 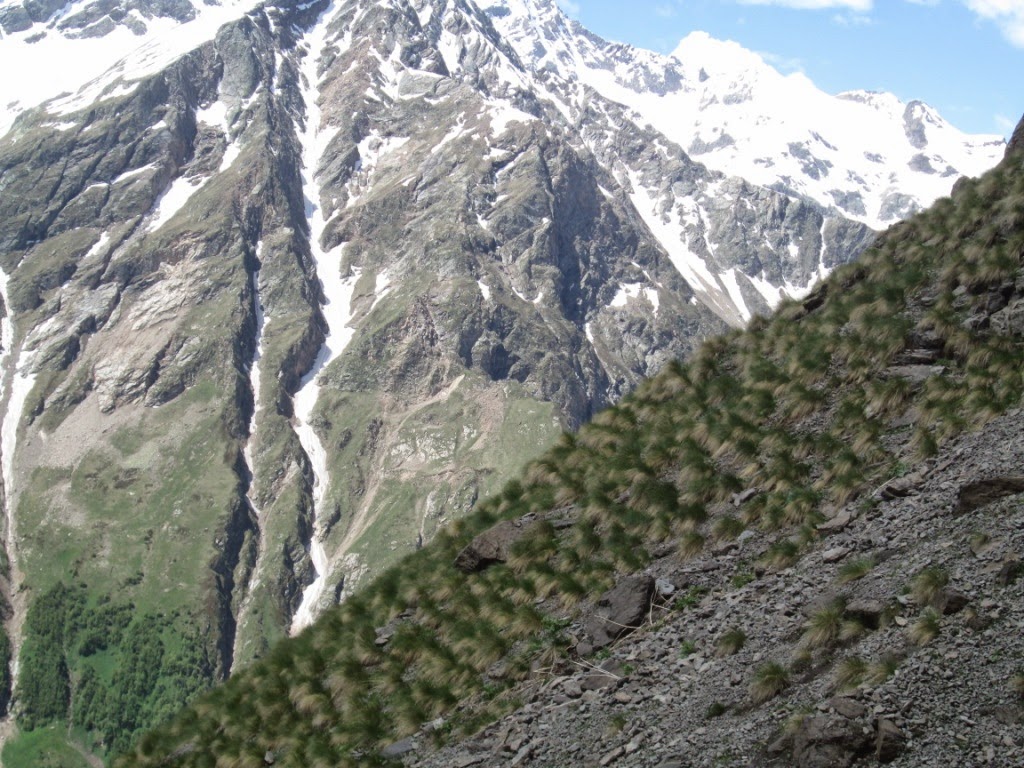 The groundcover in the vicinity of the falls is striking. It comprises uniform tufts of green and dun wirey grass that populates the rock-strewn 45 degree slopes, and more intriguing are delightful clumps of arresting blue five petalled flowers. These are so blue that they seem to be the essence of blue and my camera fails miserably to reproduce the colour. 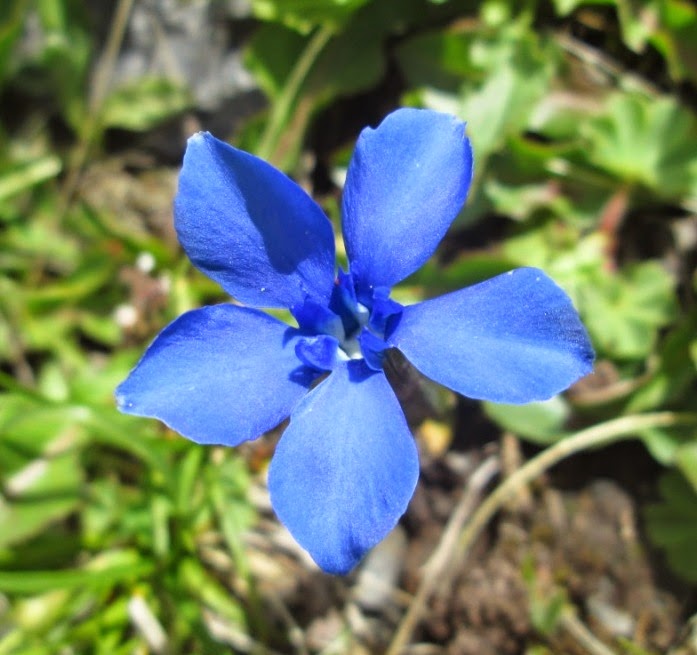 I skip (well more of a jog actually – although my mind is hopping and skipping, because this is such a wonderful walk and I wish to be nowhere else) back along the detour track that we had traversed to visit the falls. I run down the short slope to the ascending jeep track that leads towards the observatory and as I slow my mad-cap pace to a steady jog up the track I am aware of my heart pounding, I start sobbing for breath and I get that dreadful rictus feeling when your whole body is craving for oxygen and your limbs flail in sympathy with that craving. Once again I have forgotten that we are at a height above which 95% of the earth’s population neither live nor venture and that irresponsible exertion is a very bad idea.
Cubist Rock Art 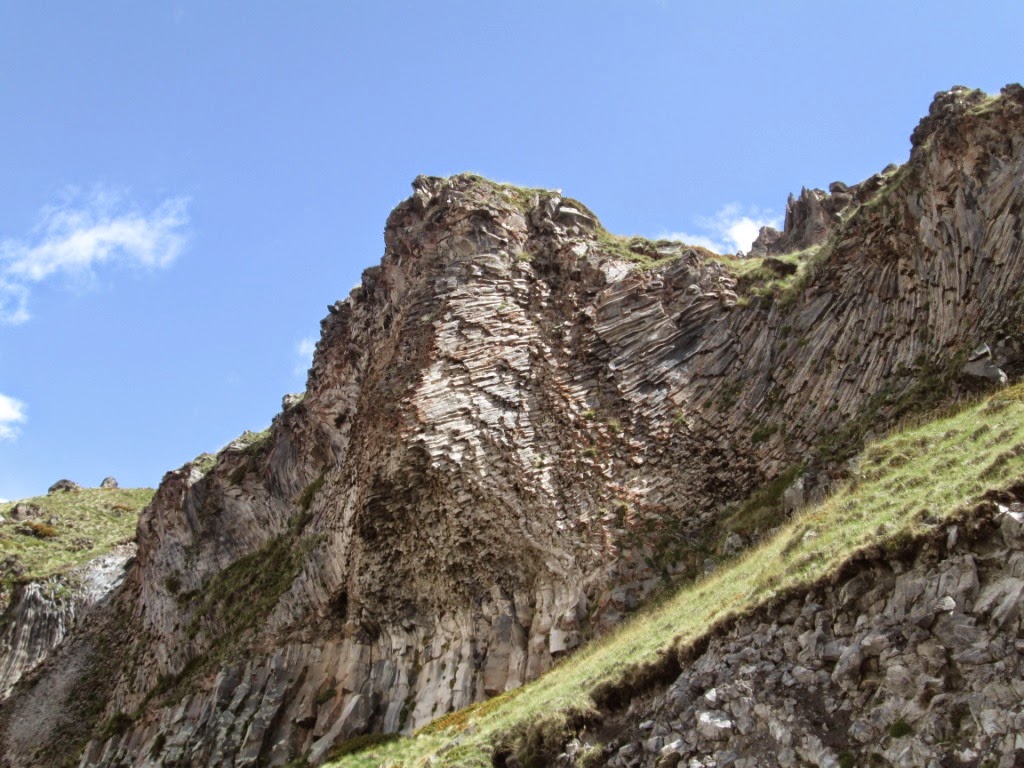 Mount Elbrus is a dormant volcano. It probably erupted sometime around 50 BP although there was no one round at the time who was taking notes or sketches and certainly there are no known photographs.  There are however some stunning testamentary formations left by the volcanic activity. 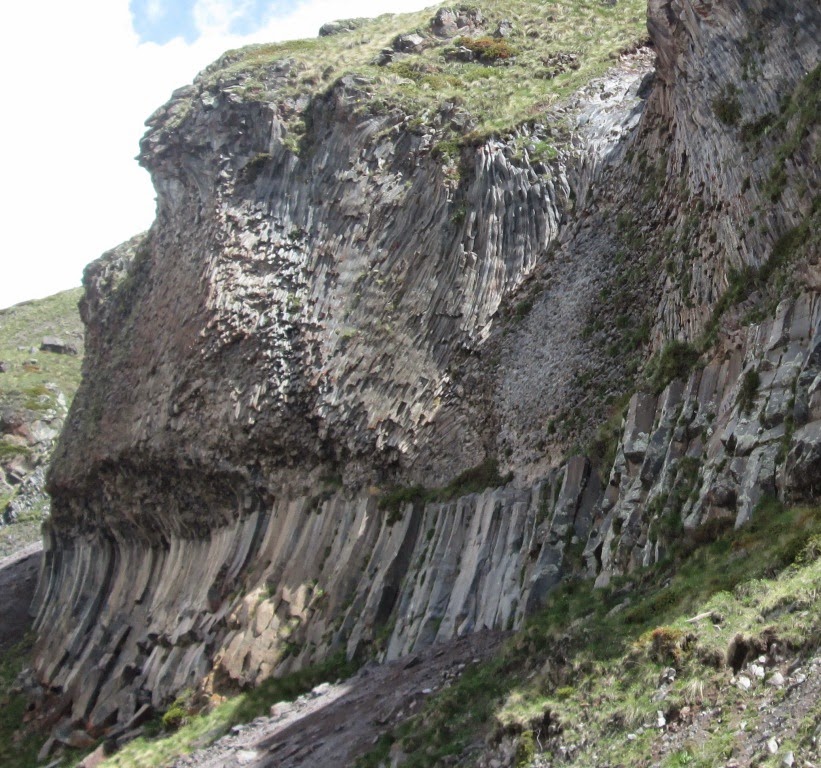 What look like extruded pipes of basalt are reminiscent of photographs I have seen of Devils Causeway in Northern Ireland but these pentagonal pipes are only 150 to 300mm across and are beautifully delicate; twisted, turned and shaped. Viewed from below they are like heavily brushed oil paint daubs. There are thrilling changes in tempo and direction as upwards thrusting shapes are abruptly cut off, dramatically truncated by a horizontal flow, which has itself been knifed through by more recent weathering. 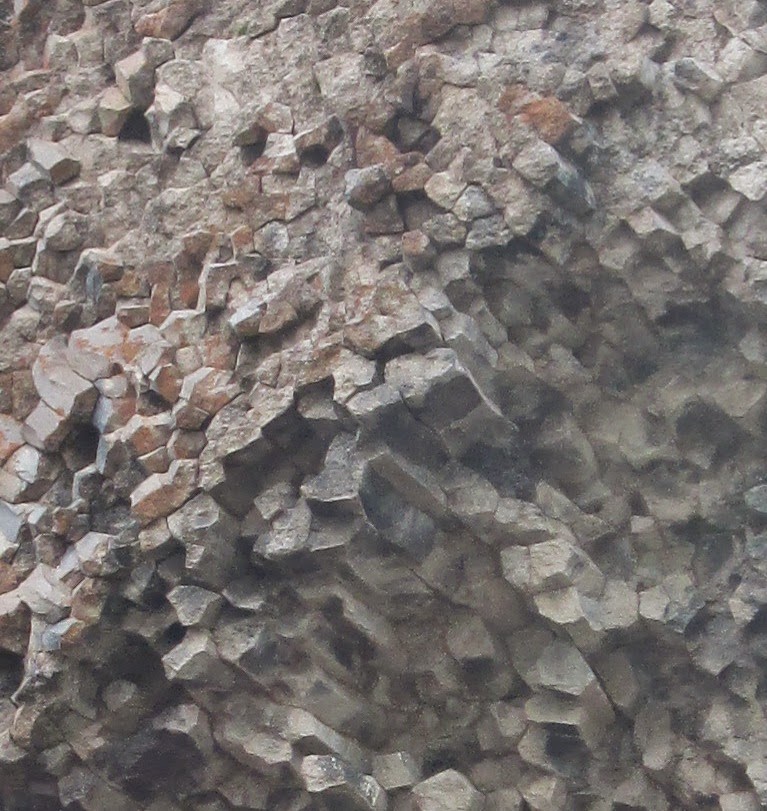 This is the most dramatic geological illustration of post impressionistic art by taking apparently non-uniform elements and binding them together to create rock wisps and flows . . . . the parts are indeed impressive – but the sum total of the parts is simply grand.

Snow Sports
I grew up with snow – at least I did when it was winter and it snowed. As children of the northern hemisphere we engaged in all those snowy occupations –snow ball fights, building snow men, tobogganing, walking knee deep in fresh powder snow, going blue with cold yet refusing to be the first to flee to the warmth of the house. As a youth I skied in the Scottish Cairngorms and learnt a little of the mysteries of snow and the mechanics and intricacies of moving around on snow; how to fall, snow-plough stops and stem-christiania turns. 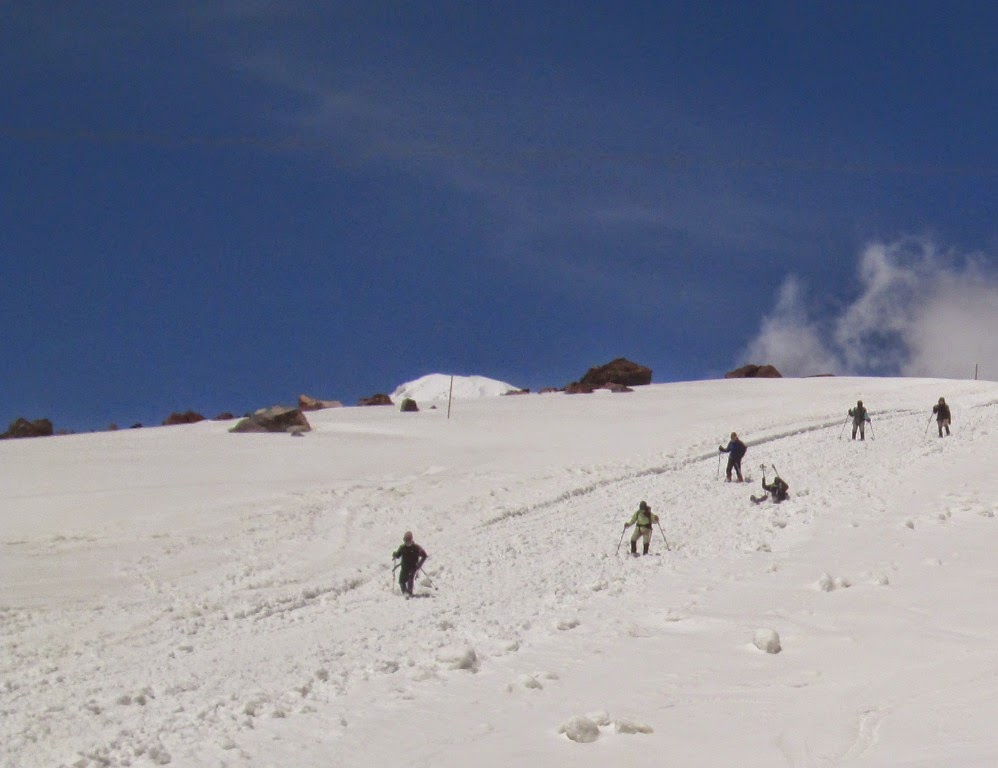 Now, years later, I am glissading down snowy slopes on the flat and unyielding soles of double plastic boots. It is a combination of scree-running and skiing and is hugely exhilarating. I am bounding out in front, Lavern is close behind laughing like a banshee. The others (like Lavern, children of Cape Town but not like her used to walking and descending on snow) are well behind variously leaping, bum-sliding, or gingerly picking their footsteps.


I come to a snowy halt, gasping for breath as my thighs, knees and ankles scream for respite because this is a downhill sport that involves muscles that are acclimatized to African environments and are unused to this strain  - but what a rush! 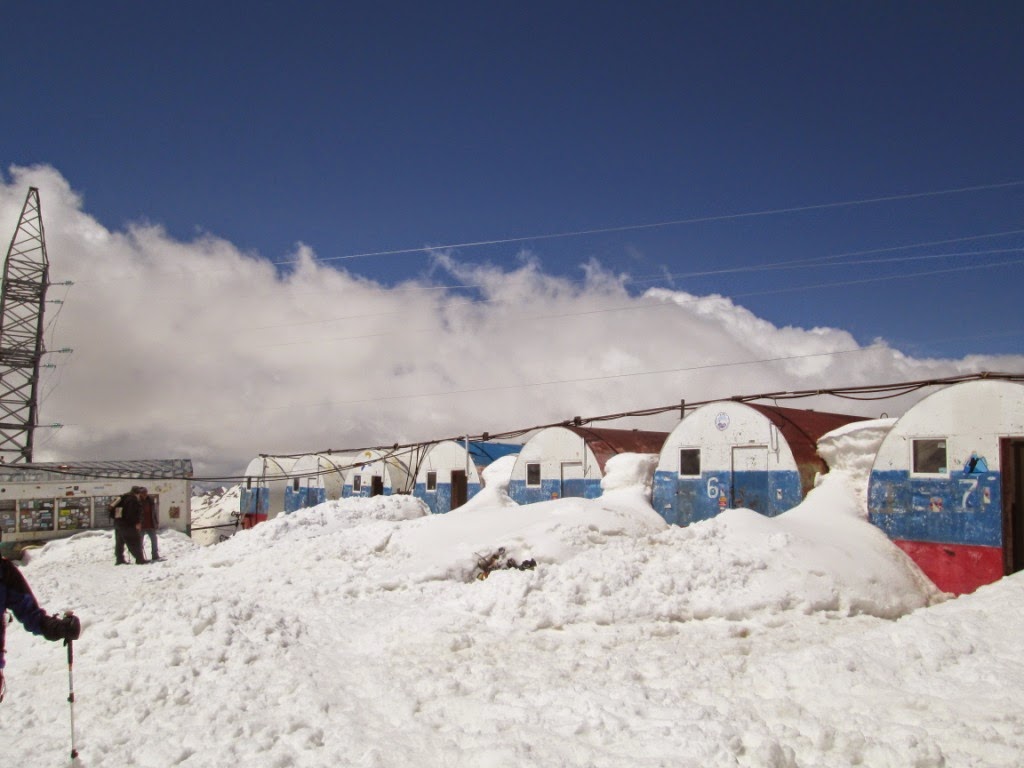 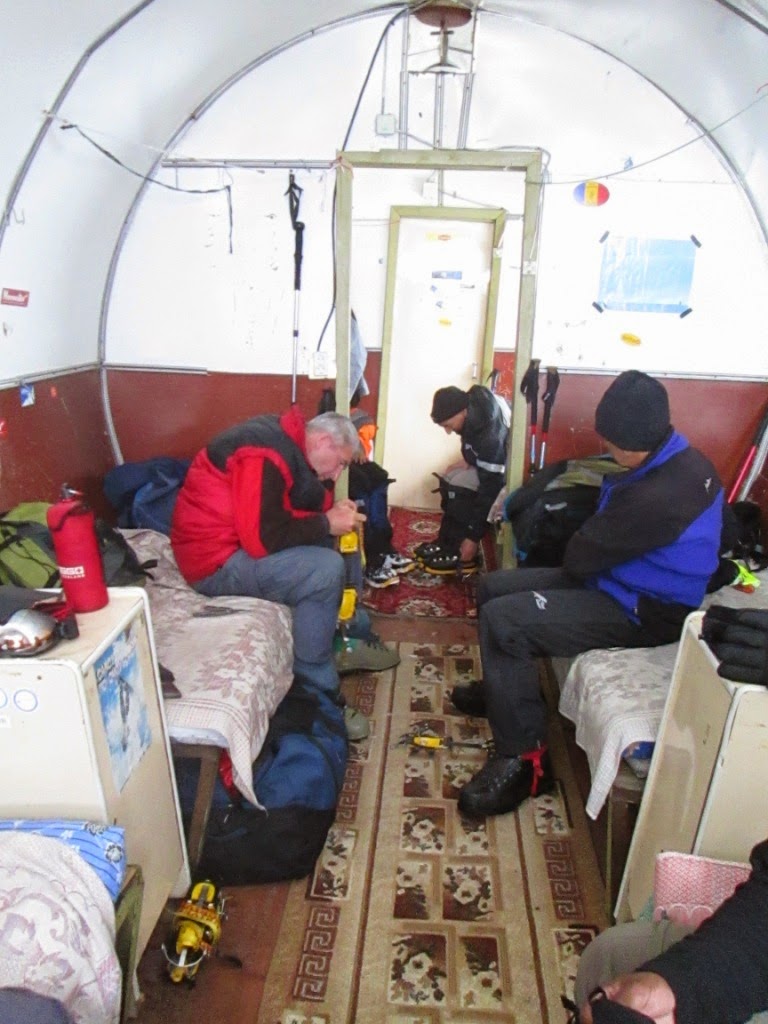 The barrels are aptly named because they are like a number of smallish grain silos that have been up-ended; painted in uniform stripes of snow white, sky blue, and dirty red; and fitted out with beds. I suspect that whatever authority that was responsible for establishing this camp was given a job lot from some abandoned Arctic research station. These structures are surprisingly comfortable, and most important, warm. They sleep four in one portion and another two in a door-less annex. As with similar accommodation the world over the curved walls are cheerfully decorated with stickers from tour firms, fanciful sketches of the ascent route, and the equivalent of “Kilroy woz ‘ere” in at least ten different languages. All this and the once bright but now threadbare carpet strips makes the place cheerful and homely.  Which is more than can be said for the toilet facilities.

The Barrels feel a bit like a cultural melting pot. It is temporarily populated with folk from all over the world who have come either to scale the mountain or to ski down it. 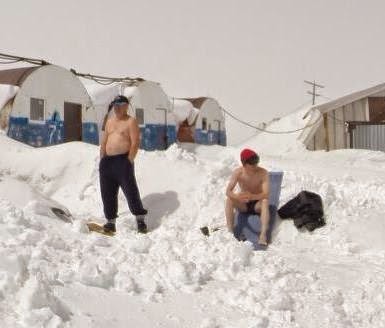 Here at the Barrels brave and macho Russian men sit naked except for underpants (it could be worse) exposing their alabaster skin to the unremitting sun. We, more conservative Africans remain fully clothed, and even the local dogs are properly dressed for the conditions.

There is a slightly less transient population of guides and skidoo cowboys and remarkable women who cook the most splendid high altitude meals, none of which I was delighted to discover had a hint of beetroot in them. Replete after feasting on soups and pastas all that remains before turning into inviting barrel number three for a high altitude night of broken sleep is a trip to the one of the worst latrines in the world.

There are no ablution facilities at the Barrels. And because of a complete lack of privacy washing is restricted to a cursory swipe over with wet wipes or similar damp and perfumed synthetic handkerchief – unless of course you are a guileless Russian willing to disport yourself in your underpants – or worse! Foot cleanliness has to wait until lower altitudes, and as for normal bodily functions, well if one is not used to this sort of thing the lavatories are something to write home about. One great advantage of altitudes where temperatures rarely exceed freezing is that organic decay is exceedingly slow and odours are suppressed. To be honest I’ve crapped in worse, but the public privies at the barrels should not (like sex, politics and religion) figure in polite dinner table conversation. 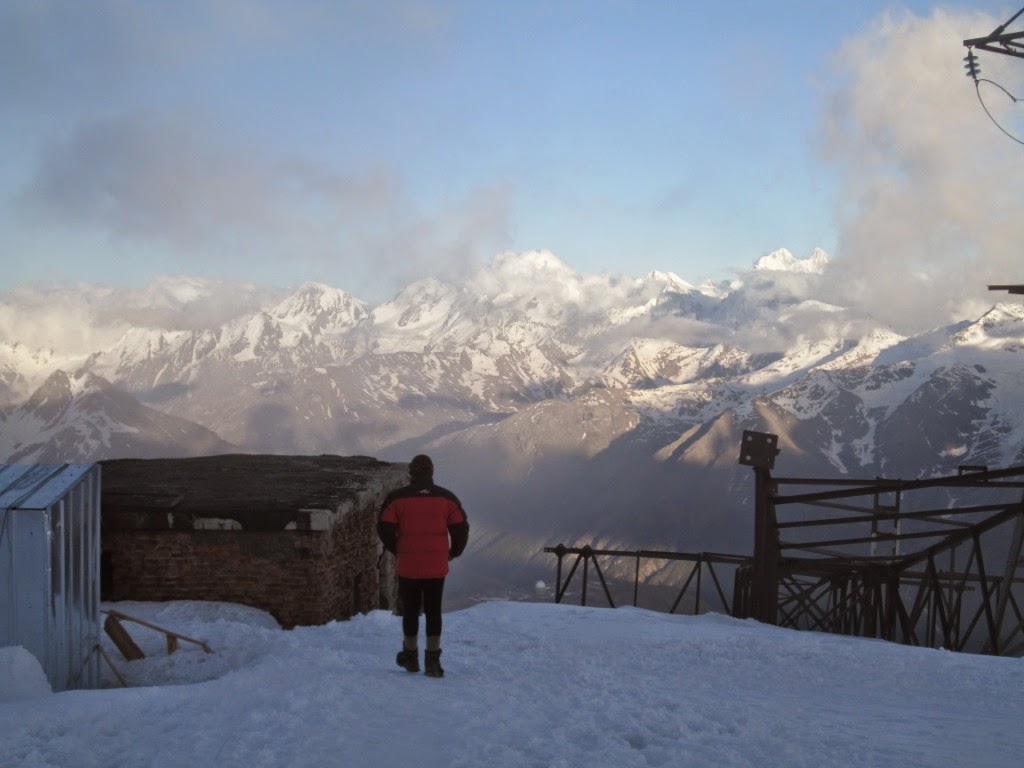 Beyond sharing these simple and vital preparations I am unwilling to elaborate further, save to say that privacy is a bit of an issue if you are not dextrous enough to do your business and hold the rudimentary door closed at the same time. My only further comment on this ghastly subject is that under no circumstances, irrespective of the awfulness of the “facilities” can one afford not to answer the call of nature. I did once ignore this advice and the consequences are too awful to contemplate.