Elbrus - Roast the Potatoes for a Rural

We are sitting outside a restaurant/cafe/bar on the edge of the village square of Cheget. 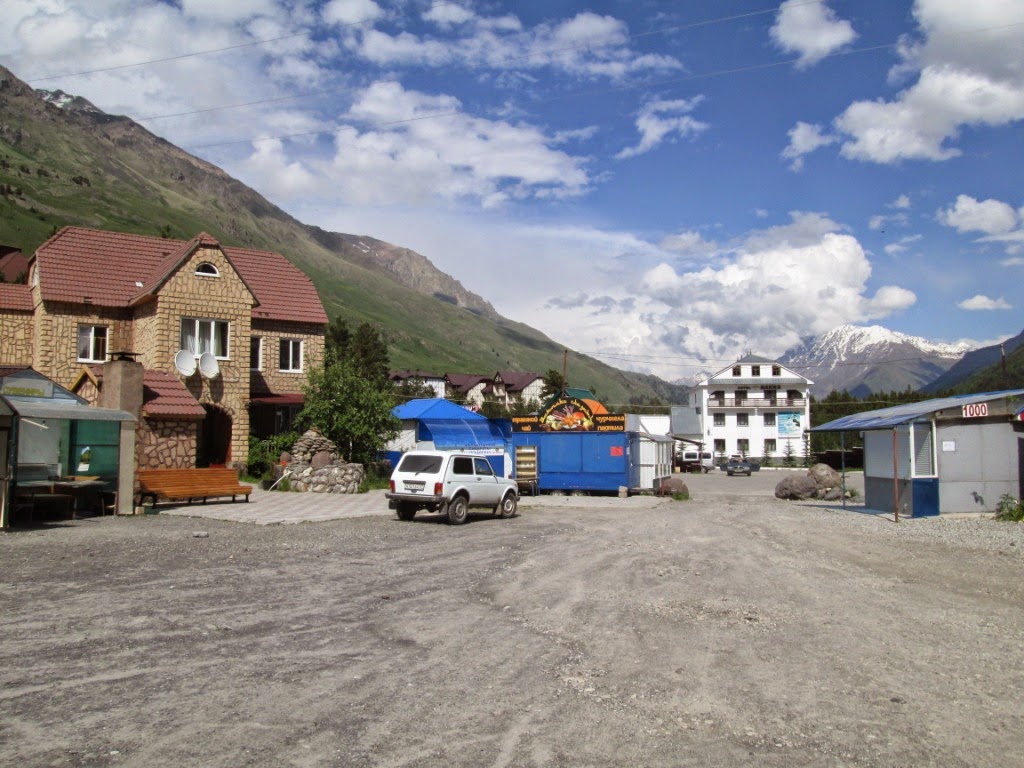 I say square but it is more “square” by function than “square” by shape, insofar that it is an un-surfaced, dusty, potholed open space around which various commercial buildings in varied states of repair sit. These buildings are almost exclusively hotels, restaurants, cafes and bars. We are luxuriating in cool Russian beers which we are drinking in isolation and in deference to our Muslim companions. I think we are drinking Terek, which is OK, but is really no different from any other average cold lager beer encountered anywhere else in the world. 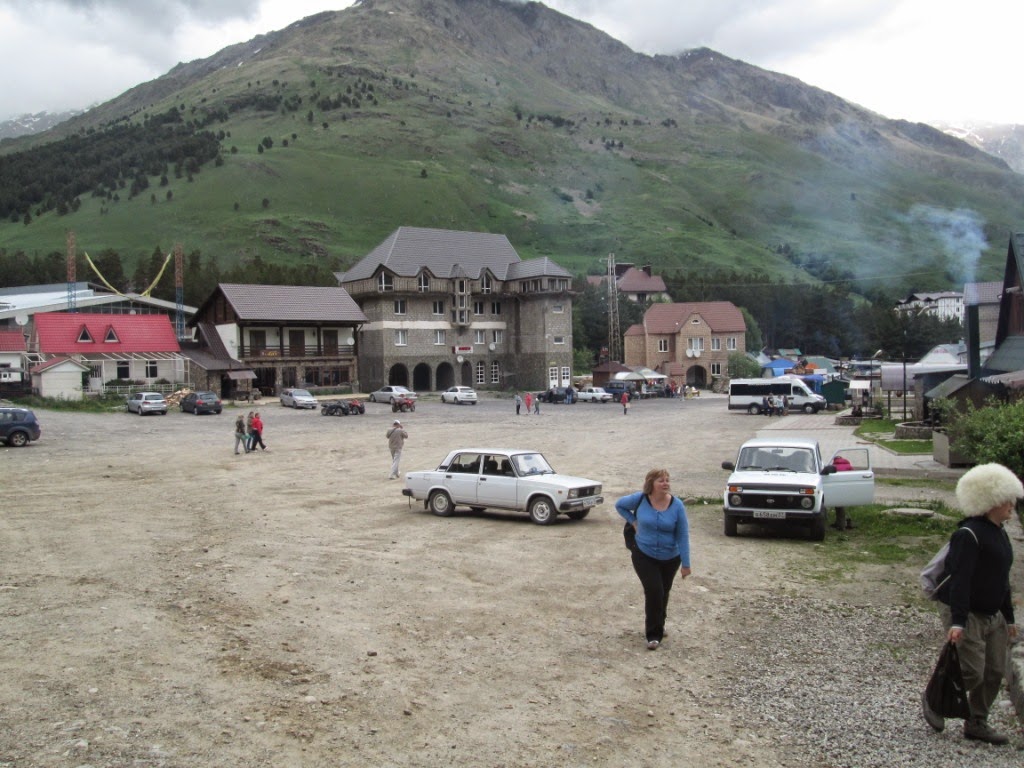 As we are mulling over our recent summit success, a black expensive looking car pulls up in front of the terrace that we are sitting on and out steps what can only be the local Mr Big. A middle aged Mr. Big accompanied by two brutal looking henchmen. I can’t remember what they were wearing but in my minds eye they were “casually” dressed and while they might have sported gold chains they certainly had gold teeth. These are archetypal “baddies” straight out of any Hollywood C movie. As they saunter towards and past us in a swaggeringly sort of way I mutter “don’t look them in the eye”, and we feign studious interest in the menu.

As the danger passes we remain gripped by the menu, which is cheerfully presented and unusually written in English. For breakfast you can have “Rise Porridge”, which (in the guise of rice porridge) I can attest to as actually being very nice and wholesome.  On the salad menu is among others “salad fondness”, and for a first course you can dine on “Ear of Salmon”. I yearn for “Toe of Trout”, “Breast of Bream” or “Tongue of Tilapia” but regrettably these choices do not appear. Both Salmon and Trout do however figure in the section entitled “Dishes on the Grill (Kebabs)” as does “The liver in fat.” However under the section marked “Garnishes”, together with boiled potatoes, rice, and buckwheat is the intriguing dish “Roast the potatoes for a rural.” Perhaps it is the beer kicking in but we cannot fathom what this may mean.

That evening we ask Vladimir what he thinks the true translation of this dish may be. What, we ask, would be his translation of whatever Russian description was at the root of this strange mistranslation? He misunderstands the question and describes the dish, which (as I remember) is fried slices of potato. But I am still intrigued as to what the correct translation of “Roast the potatoes for a rural” ought to be.

Later, much later, using a translation program I enter “Roast the potatoes for a rural” and get “Жареный  картофель  по  деревенски” which I then re-enter  for an English translation and get “Fried potato wedges”. So Vladimir’s description of the dish holds up, but I am still intrigued by the etymology that has led to such a bizarre translation. 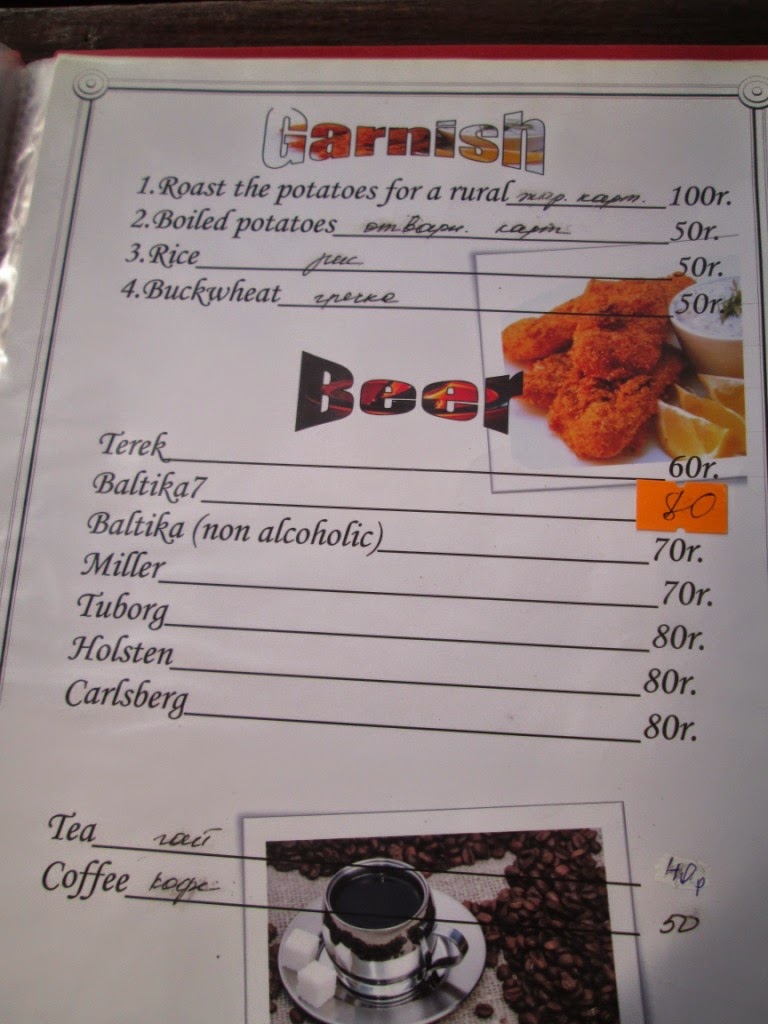 Posted by Steve Mitchell at 6:29 pm

Email ThisBlogThis!Share to TwitterShare to FacebookShare to Pinterest
Labels: Cheget