A first and gentle encounter in a formal and well kept linear garden lying between two streets. 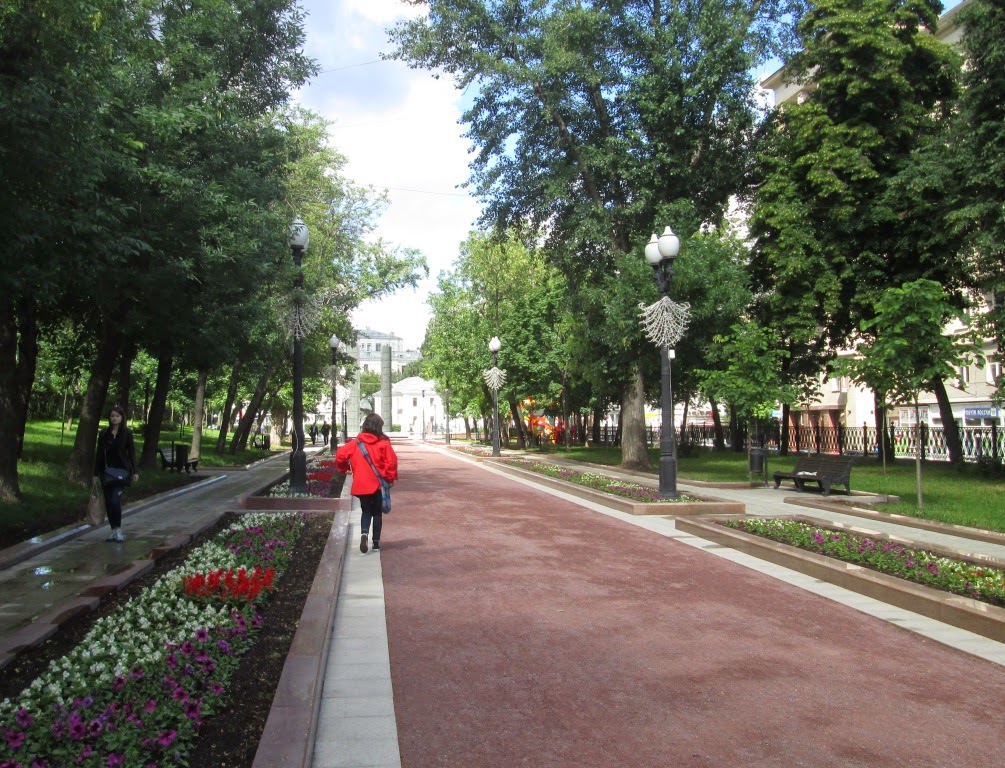 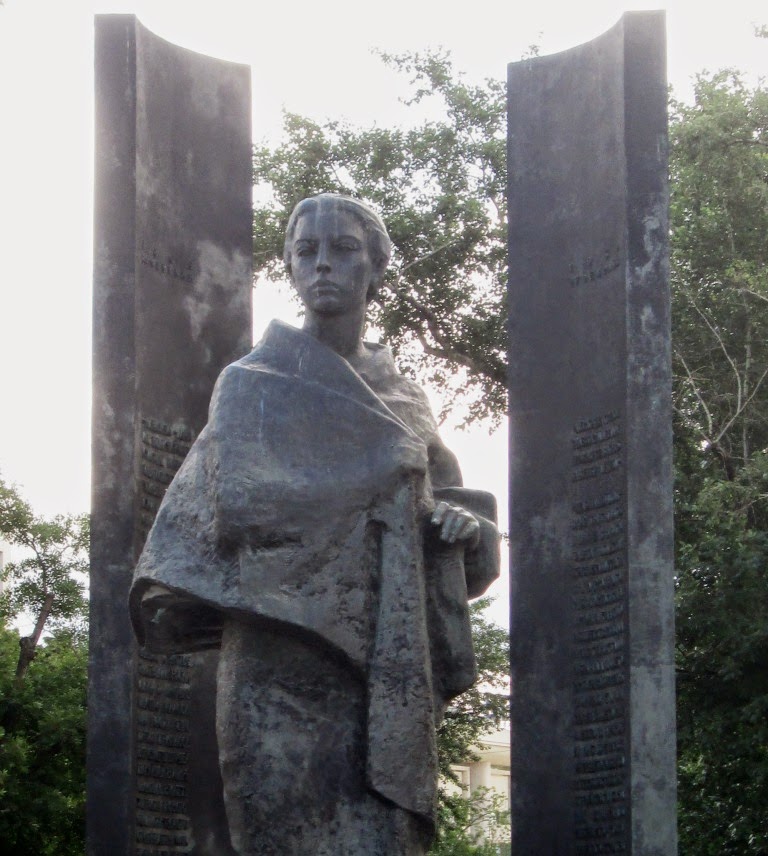 A young woman of extraordinary beauty and grace set in front of two curved explanatory tablets. The text is naturally in crylic so I could not fathom either her name or why she had a statue in her honour. Later I discovered that she is N. K. Krupskaya who was none other than V. I. Lenin’s wife and a noted Marxist and political activist in her own right. Photos of her later in life bear little relation to the stunning depiction of her in that peaceful part of Moscow, but she does have the high honour of having an asteroid named after and the dubious honour of having her name on the wrapping of a popular chocolate bar. 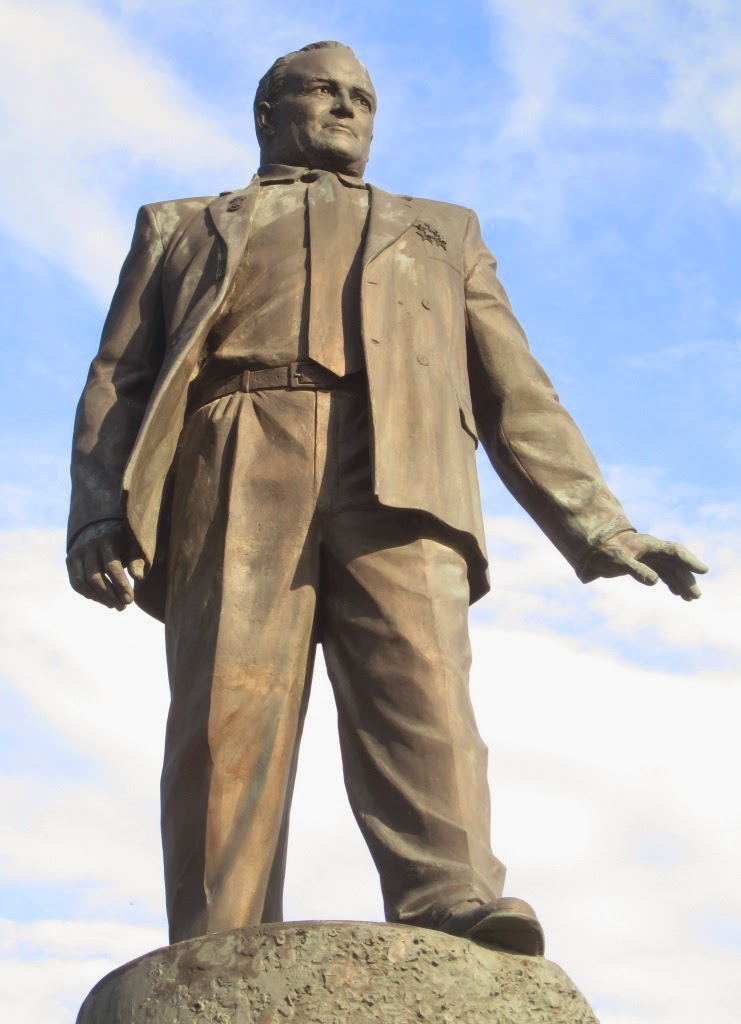 In contrast, in Cosmonauts Alley which is lined with heroes of the Russian space program, there is a fellow who clearly had something important to do with Soviet space endeavours. Again in ignorance of the Russian language and alphabet I could not ascertain who or what he was, although there is a depiction on the plinth that indicates something to do with Sputnik. He stands square jawed with rigid shoulders and exudes supreme confidence and looks as if he will move off at any moment, and when he does he will walk with a swagger. The realism is amazing, and I somehow didn't feel that I would have liked meeting him.

As a youth I fell hook, line and sinker for the soviet dream that was depicted in the West by “Challenge” the mouthpiece of the Young Communist League. I read the Communist Manifesto and Engels’ necessary accompanying commentary. I was fired by a visceral desire to do good and responded at a deeply emotional level to the photographic heroic depictions of noble young men and women facing the rising sun with jutting jaws and heaving breasts, or rather more accurately in my young and testosterone fuelled imagination - jutting breasts and heaving jaws. Tremendous, stirring and fiery stuff.

Later I came across real life examples of revolutionary iconography, youthful heroism and nationalism half a world away in post civil war Mozambique. But here in Moscow, the home of my original youthful yearnings, I was now confronted with the core of uncompromising revolutionary bravado and nationhood. Moscow unashamedly revels in it and by God it is magnificent! 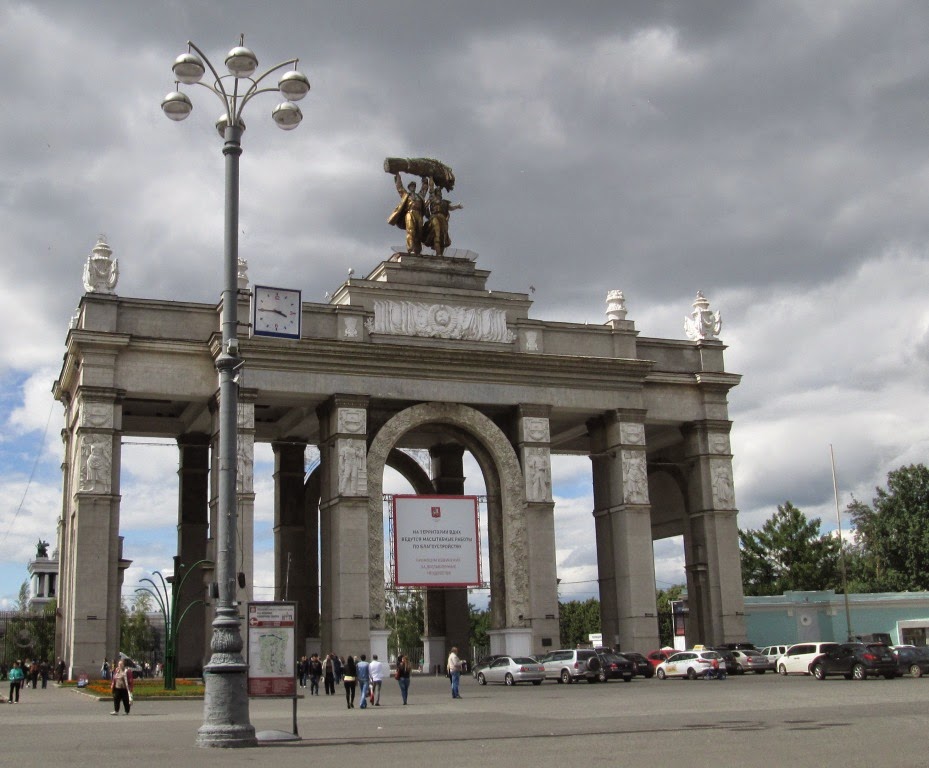 Moscow does indeed do statuary very well and I feel partially qualified to say that with confidence because our hotel was positioned at one end of a vast area called All-Russian Exhibition Center a permanent trade fair venue. VDNKh is short for vystavka dostizheniy narodnogo khozyaystva which apparently translates to “Exhibition of Achievements of the People's Economy” which is suitably and satisfyingly triumphalist -  and hooray for that.

To enter this wonderland one walks beneath and through a vast five arched structure (The Propylaea) that suffers from being a mish-mash of several classical styles and bas reliefs  – but atop of which is – oh bliss – a statue of heart stopping nobility.

Gold clad the Tractor Driver and Sovkhoz Woman hold aloft a wheat sheaf that is heavy and fat with organic goodness and socialist triumph. 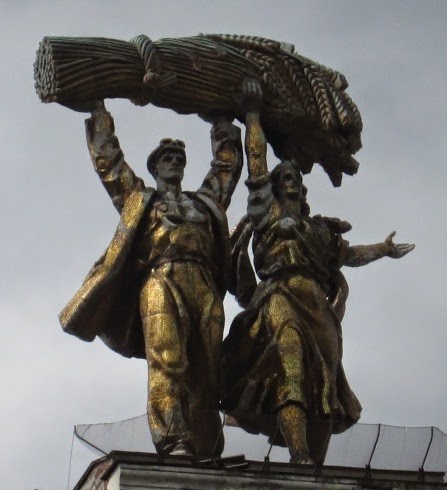 Gold is a recurring theme, especially in a resplendent fountain in this same complex. The Fountain of Friendship of the Nations is a striking circle of robust and fecund women in a variety of traditional or national costumes, although from which nations I could not fathom. I presume they are all from nations within the old soviet fold? Whoever they are and whomever they represent they are magnificent examples of the species. 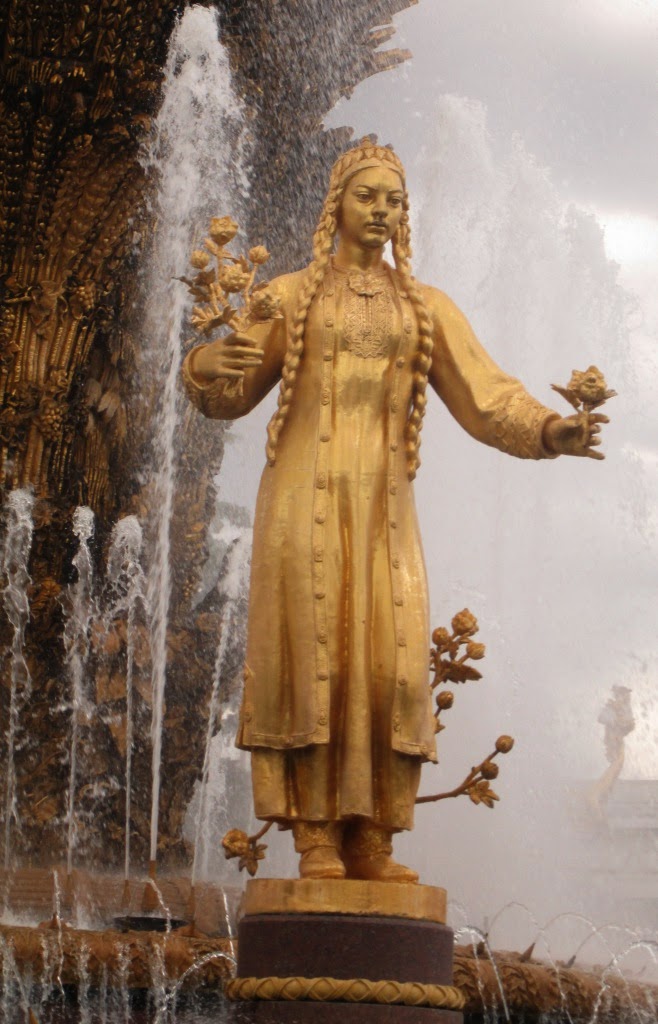 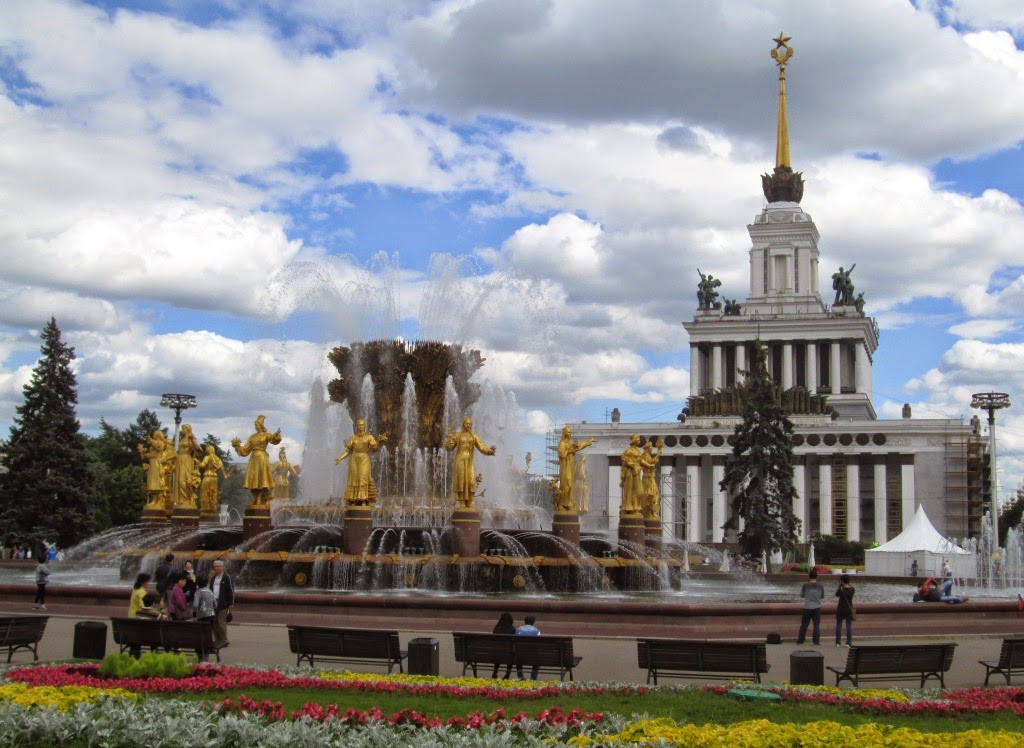 In the centre of the triumphal esplanade that bisects this vast area is the inevitable statue of V.I. Lenin. There must be hundreds of such statues throughout Moscow, let alone Russia. Here he stands, beetle browed, avuncular and imposing in classic pose – exuding thoughtful power; grasping coat lapel in one hand and a rolled document in the other. And then with paternal and watchful eye he gazes over an early evening modern day rock concert towards citizens from an earlier era - the Tractor Driver and Sovkhoz Woman silhouetted against the dusk sky. 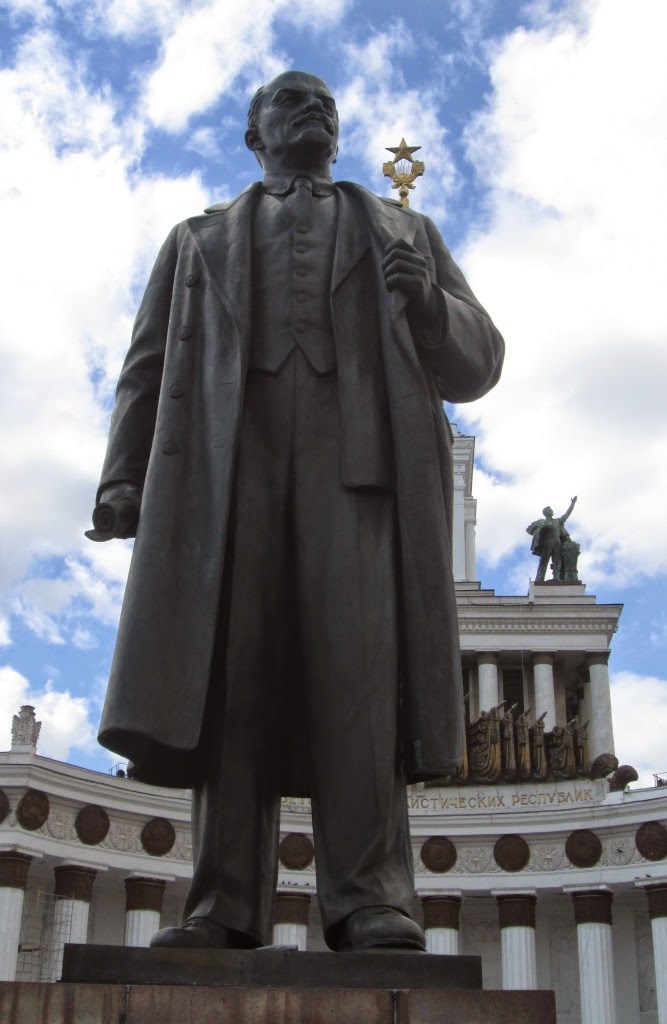 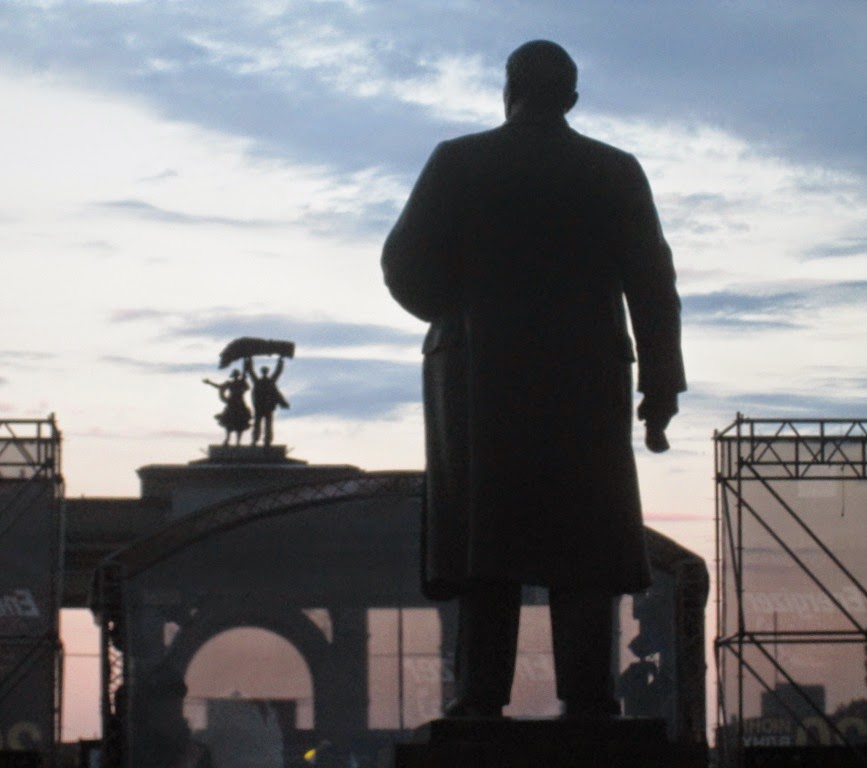 On the morning of my departure I walked from our hotel North along a busy duel carriageway towards a statue that had been looming in the middle distance throughout our brief stay. In a way it is more monumental from a distance than it is from close by - but no less grandiose for that - for it is vast. 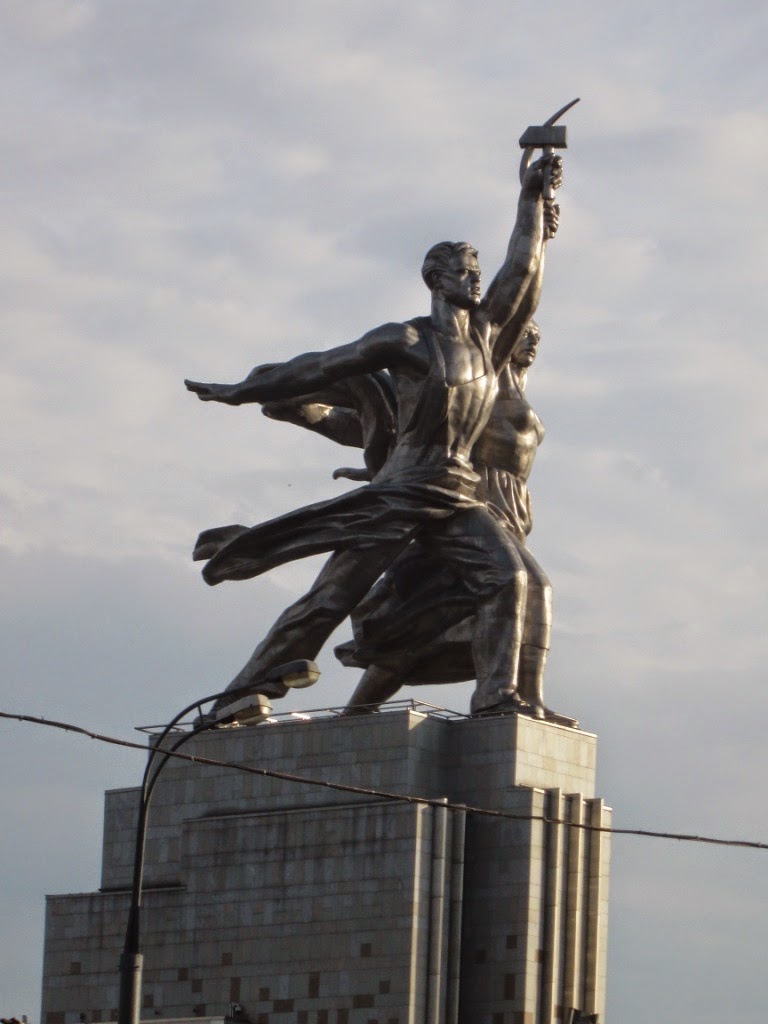 For sheer size and power "Worker and Kolkhoz Woman" cannot be beaten. I gazed with open mouth and understood the loud and huge clarion call to arms, or the plough, or the sickle, or the hammer and imagined that I heard Shostakovich Second Symphony dedicated to the 1917 October Revolution.

There are so many more, and I am reluctant to even mention the bizarre appearance of a stone effigy of General Charles de Gaulle incongruously framed against the unwelcoming curved facade of the 30 storey Hotel Cosmos. 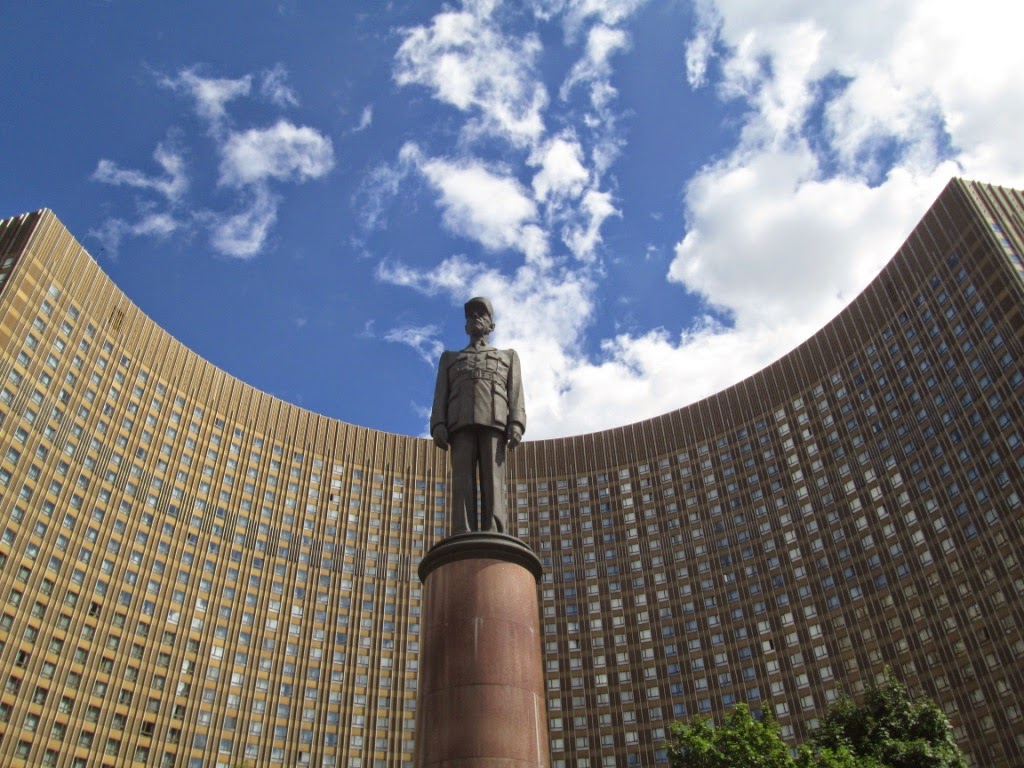 But for me the most striking of all the Moscow statuary I saw are the two flanks of the Monument to the Conquerors of Space which are decorated with haut and bas-reliefs depicting men and women of the space program: and notably Laika, the first space dog. 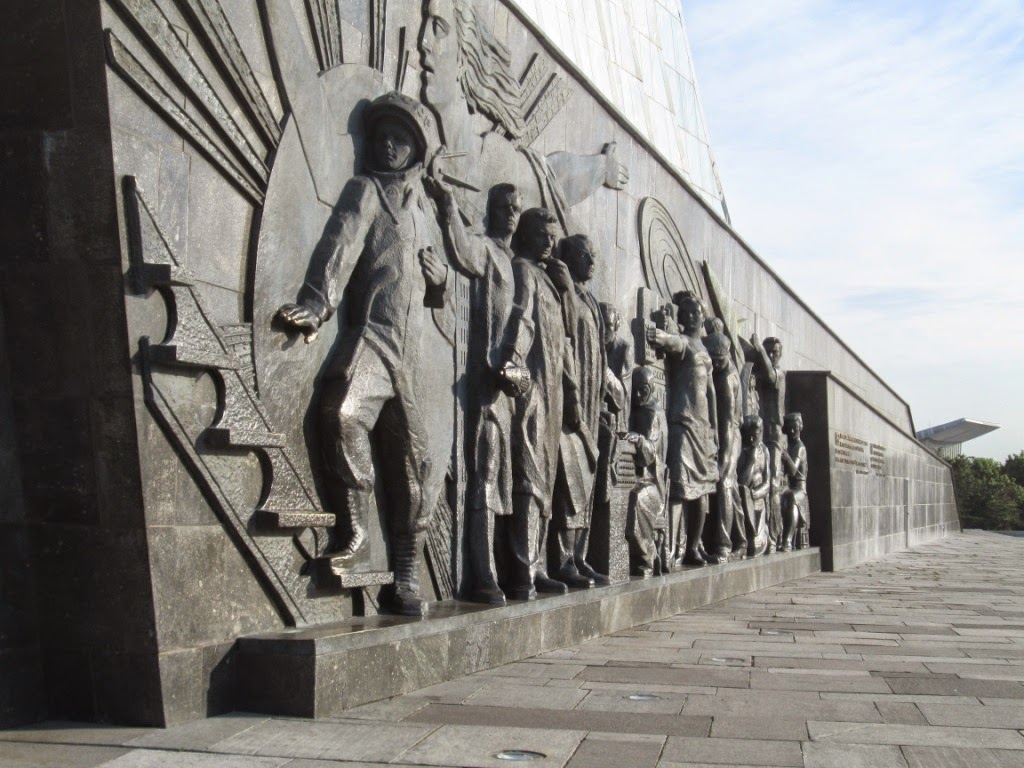 This piece of visual historicity is monumentally topped by the piece de resistance, an ascending rocket eternally supported upon a titanium con-trail, setting a clear course for the heavens – both physically and metaphorically. Quite stunning. 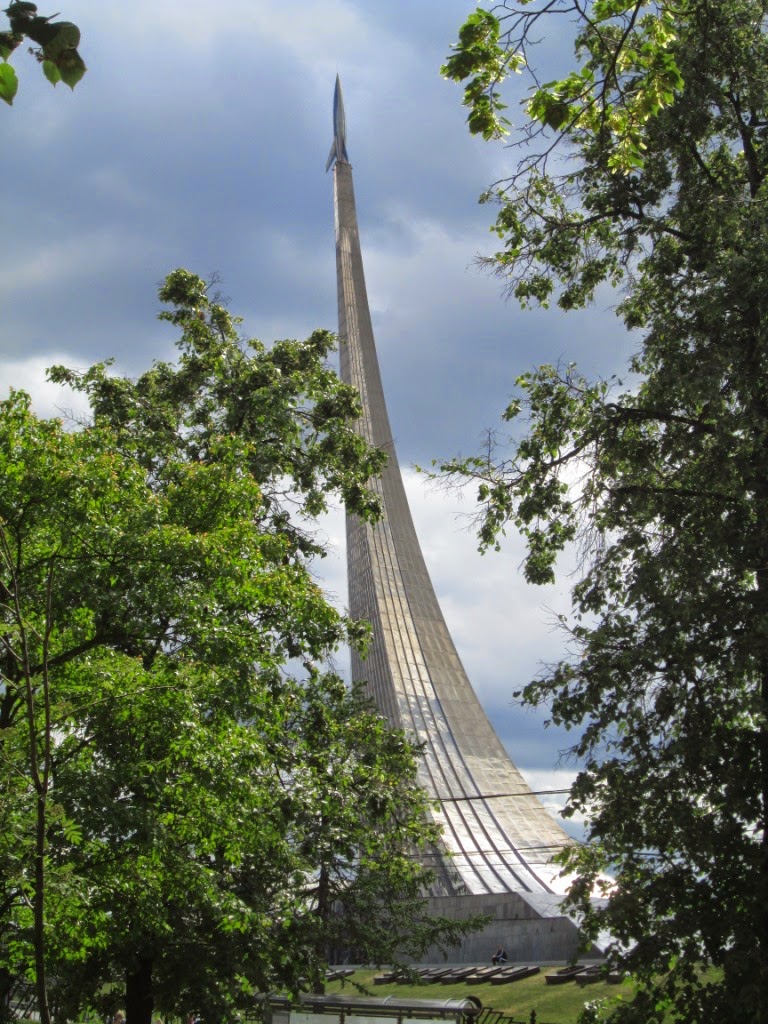 And more by luck than design I managed a photograph that caught the perpetually ascending (and thus ironically static) rocket against an ephemeral sky and a moving lunar target. 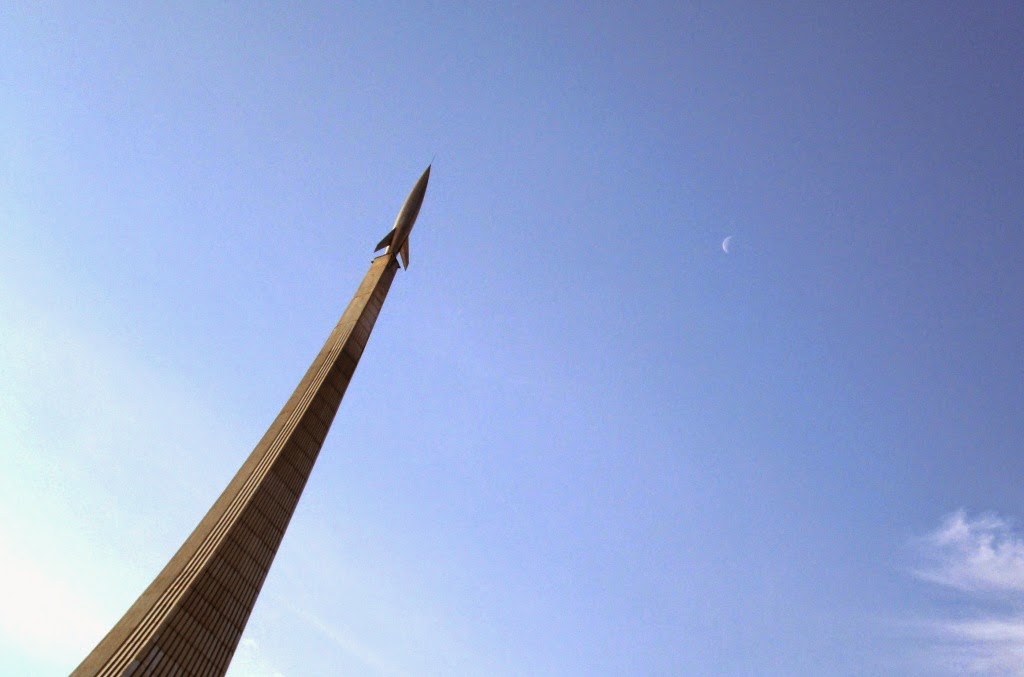 Posted by Steve Mitchell at 9:22 pm