There’s been an amusing face book exchange that revolved around the statement “I say Pitch Black and what do you say?” or something along those lines. Aside from a couple of misguided racially motivated sideswipes the responses have been short, sharp and amusing. I weighed in with a limp-wristed “Grey scale?” The response was “So WRONG!”, and my guarded reply was “I was merely referring to printer technology!”

But it got me thinking about “Black & White” and “Grey Scale” as analogies. Dangerous ground I know, leading as it may to the slippery slope of triteness and simplicity – let alone fuelling the toxic debates about “colour” that are playing out in so many public media spaces at the moment. But throwing caution to the hurricane winds of social memes  . . . .

Look at a photograph of a landscape that is rendered in “black and white”. The foreground is pitch black and merely frames what is behind. The hinterland retreats with perhaps four discernible grades of less blackness into a grim and flat backdrop. The road in the middle distance looks like an ancient scar. 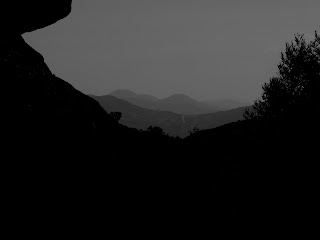 Compare that with the same scene rendered in a grey scale. 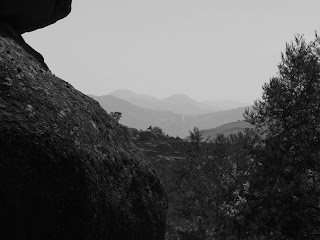 Now, the framing is evidently a fascinating combination of rock and vegetation of complimentary differing textures and permanence. The immediate foreground leads the eye tantalizingly through a more open ground middle vista to the more distance undulations. The picture is now nuanced and is imbued with depth, recession, place and meaning, and vitally – imagination!

The same exercise can be done with a human landscape. 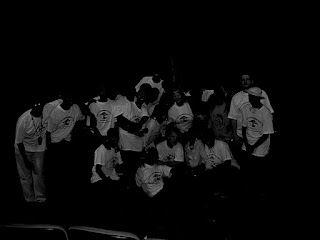 In this photograph the black and white rendering is striking because of the predominant white shirts which give some indication of body shapes and stances. There is some feel of grouping, of social interaction, but it is vague and flat.

Re-render this in grey scale and now the degree of interaction becomes evident. 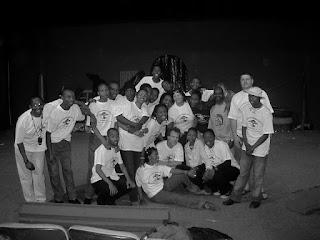 The nuances are not of distance and texture, but are of closeness and harmony. There is a dynamic that speaks of connection and common purpose (or achievement) that is not evident in the black and white rendering. The delight in and of this tableau is evident.

So there you have it.

Observations, statements, thoughts, angry outbursts, and emotional outpourings rendered at flat, binary dimensional black and white scale become sarcasm, vituperative, divisive, and hateful stigma. They cannot compare with a grey-scale rendering which will provide a nuanced view. Apply the essence of grey-scale sensitivity and get the sense of depth, of texture, and the potential for harmonies.

And photographs in colour?

Well observations and views at that level would represent true enlightenment!
Posted by Steve Mitchell at 9:16 pm 9 comments:

I have been following the “Brexit” debate in the UK with a sense of awe and confusion.

The arguments revolve around an extraordinary spider’s web of macro-economics, geo-politics, and advanced (and pretty nasty) nationalism. It strikes me that the interaction of all the strands and tensile academic arguments pull and push, mesh and entangle in an extraordinary fashion, Tweek one of the parameters and the matrix shudders in a myriad of directions. This is surely a case of domestic/regional politics that has GOT to be informed by advanced socio/political/economic thinking and not idiotic and ill-informed polemics.

To place the decision as to whether the UK should stay or leave the EU in the hands of the voting public is beyond stupid.

Who - beyond academics and qualified researchers and commentators are qualified in any way to make an informed and value judgement on this issue?

Certainly not the general public who are fundamentally ill-equipped, and God knows why should they be expected to be? After all surely this is what politicians are elected for – to make these sorts of decisions. But there again have any of the vocal (or comatose) politicians actually demonstrated anything other than a partisan stance on this issue. Few of them have demonstrated any real and deep understanding of the underlying fundamentals and have relied upon vague statistics and appeals to regional compatriotism or deep seated and frankly childish “island” mentality.

Surely the answer is to have some form of collegiate system of political appointment which would allow for qualified persons the room and responsibility to take complicated and arcane decisions for the general public. Just like the American collegiate system of selecting a President . . . . which . . . will . . . ensure . . . on present showing . . . (Oh my God) . . . doom.

So there you have it. One political system that has devolved an impossible decision on the electorate, and another that is in danger of imposing an impossible decision-maker on the electorate. Surely someone else in our rapidly contracting and dangerous world has a better idea? Because unless they have, all that thunderous, dystopian literature of the mid to late 20th Century will surely come to pass.
Posted by Steve Mitchell at 8:19 pm 2 comments: